Update Required To play the media you will need to either update your browser to a recent version or update your Flash plugin.
By Dan Friedell
07 September, 2016


Fans of American-style football are looking forward to the opening of the National Football League season on September 8.

The sports league includes 32 professional teams from around the U.S. They will play against each other for the next four months. All are seeking the chance to play in the championship, known as the Super Bowl, in February. 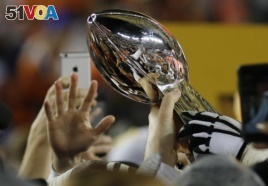 The NFL championship is the most-watched sporting event on television in the U.S. It is also popular in other countries.

The 2016-2017 season begins with a night game between the Denver Broncos and Carolina Panthers.

It will be the first time the season has started without quarterback Peyton Manning since 1998. Manning retired after winning the Super Bowl in February. The 40-year-old former player for the Denver Broncos and Indianapolis Colts now jokes about all his free time in television commercials.

The last time a season started without Tom Brady as the quarterback of the New England Patriots was in 2001. He became the team's quarterback in the third game of that year.

This year the 39-year-old athlete is suspended from play. The NFL says he can return in the fifth week of the season.

For 15 years, Manning and Brady have been the highest profile quarterbacks in the NFL. In football, the quarterback is responsible for starting each play with the ball and throwing it, running it or handing it off to a teammate.

The quarterback is a player on offense. Its goal is to move the ball down the field. Teams score by moving the ball into the opponent's end zone. That is called a touchdown.

The defense is responsible for pushing against the offense and stopping the offense from moving the ball down the field. The defense can win control of the ball for their team if the other team does not make enough progress.

Football fans and sports industry experts are discussing the future for the Broncos and the Patriots now that their stars are gone.

Of course, Brady will be back. The NFL ordered his suspension as punishment for his actions in an important game two seasons ago. He was found to be playing with footballs that were underinflated. Such balls can be easier to throw and catch in cold weather.

New England is replacing Brady in the first four games with Jimmy Garoppolo. He does not have much experience in the NFL. In two seasons, he played in only 11 games for the Patriots.

Denver's new quarterback is Trevor Siemian. He has even less playing time than Garoppolo. Siemian has played in just one NFL game. Siemian says he hopes he can put to use some things he learned from Manning last year.

Devin McCourty is an experienced New England player. He says Brady cannot be replaced by just one man.

"I think it's going to be a true team effort to try to replace what he's built here and what he's been able to do, week in and week out," McCourty told the Associated Press.

The league is divided into two groups, the American Football Conference and the National Football Conference. After practicing and playing warm-up games all summer, teams and players are ready for the new season. The season opener is a Super Bowl rematch between Denver and Carolina.

The season includes 16 games and lasts 17 weeks. The last game before the playoffs is January 1, 2017.

Reporters who cover football for the magazine Sports Illustrated picked the teams they thought would be the best this year. Denver, Carolina and New England are expected to be good. Also, the writers say teams from Arizona, Seattle, Green Bay and Pittsburgh should be strong.

Ricky Jean-Francois is a defensive player for the Washington Redskins. He is a six-year veteran and played in the Super Bowl once, as a member of the San Francisco 49ers.

His team's season starts Monday night. Washington plays the Pittsburgh Steelers, one of the NFL's most famous teams.

"I'm overly excited. I've been waiting on the season to come about. It's going to be an amazing season. I just want everybody to make sure they're there to enjoy it like we are. It's great to play a team like that [Pittsburgh] a team that's a playoff team each and every year and a team that's a Super Bowl contender each and every year. So it's good to start the season off against a team like that."

Dan Friedell wrote this story for Learning English with material from the Associated Press. Caty Weaver was the editor.

Are you excited for the start of the new NFL season? We want to know. Write to us in the Comments Section or on 51VOA.COM.

inflate – v. to add air or gas to (something, such as a tire or a balloon) and make it larger

challenge – n. an action, statement, etc., that is against something: a refusal to accept something as true, correct, or legal

veteran - n. someone who has a lot of experience in a particular activity, job, etc.

contender – n. a person or team who has a good chance of winning

high-profile – adj. attracting a lot of attention in newspapers, on television, etc.

tournament – n. a sports competition or series of contests that involves many players or teams and and usually continues for at least several days