Update Required To play the media you will need to either update your browser to a recent version or update your Flash plugin.
By VOA
16 June, 2014

The United Nations says hunger kills more people every year than AIDS, malaria and tuberculosis combined. There has been progress since 1990 toward ending hunger. But it is estimated that more than 840 million people worldwide still do not have enough to eat.

Asma Lateef is the director of The Bread for the World Institute. She says there is now a chance to end world hunger – and not just react to emergencies.

"Well, I think we are in a good space right now. I think for the first time in human history we have the prospect of ending global hunger within a generation – by 2030," Lateef said. 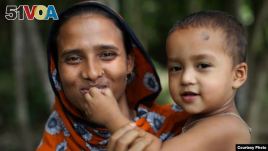 Ms Lateef says many countries have work together to try to end hunger worldwide.

In 1996, the U.N. World Food Summit released a document known as the Rome Declaration. It called for reducing the number of hungry people by half within 20 years. Ms Lateef says when the document was released there was no plan on how to meet that goal.

"There was a great focus on industrialization. I think people felt that if you helped countries develop and have economic growth that that would address hunger as well. And so you did find, actually, a huge reduction in extreme poverty around the world. But that didn't translate into – necessarily at the same pace – a reduction in hunger," Lateef said.

Ms Lateef says a food security crisis in 2008 caused by high prices and shortages, caused countries and organizations to change the way they fight hunger.

"It was the global response that came as a result of that food price crisis. It was a real wake-up call. Riots around the world as people were really struggling to be able to afford food and prices of basic commodities had just skyrocketed. That got the attention of a lot of policymakers, including U.S. leaders at the time. And since then, the Obama administration has really made food security and hunger a priority within global development programs and has galvanized global attention to this issue," Lateef said.

Ms Lateef says the crisis helped political leaders understand that food insecurity was a threat to national security. She says policies developed during that crisis have helped reduce hunger.

"We're very close to achieving the Millennium Development Goal of halving hunger by 2015. We won't make that target because it's next year and because of the food price crisis, but the effort that's been put in over the last few years really puts us on track," Lateef said.

She says enough food is being produced now to feed everyone on the planet. But she says many people do not have enough money to pay for it.