NGOs Work to Stop the Spread of Ebola

Update Required To play the media you will need to either update your browser to a recent version or update your Flash plugin.
By VOA
13 July, 2014

The aid group Plan International says the Ebola outbreak in West Africa could become a health crisis in other areas. The group is calling on West African countries to work together and appealed to the international community for more support.

Unni Krishnan is the head of disaster preparedness and response for Plan International. He is very worried about the situation.

"This is a serious outbreak, which has serious regional dimensions now. It is not a global health crisis at this stage, but it has the risk that if we don't contain it at this stage, it is possible that it can get out of control and even reach other places. So this outbreak needs all the support from the rest of the world, so that we are able to stop its spread and save lives and help people and communities that have been impacted with this."

Plan International and other organizations are helping local officials with containment and prevention efforts. They are also treating people, and supplying medicines and medical workers.

But Dr. Krishnan says all of the effort has not been enough. 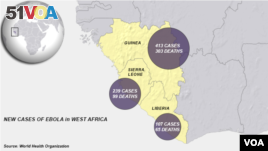 "You are talking about countries with some of the weakest health systems and health infrastructure. And with each passing day, the demand on agencies who have been acting on the ground has been increasing. We are stretched to our limits now. So this outbreak needs a much more coordinated response at the global level from developed countries and those who can afford both human resource, technical specialists and other infrastructure and machinery to contain this."

Dr. Krishnan says health officials need to improve how they identify the disease within affected communities and at border stations and airports.

He says health workers also need to publicize even more messages about methods for good health and cleanliness. And he says people need to be told how the often-deadly disease is spread.