NHL Players Will Not Compete at Beijing Olympics

Update Required To play the media you will need to either update your browser to a recent version or update your Flash plugin.
By Dan Novak
22 December 2021


The National Hockey League, or NHL, says it will not send players to the Olympic Games in China because of COVID-19 concerns.

NHL chief Gary Bettman made the announcement Wednesday following a sudden, sharp rise in cases of the disease among players. At least 50 professional hockey matches have been postponed as a result.

The 16 days of winter sports competition begins in Beijing on February 4. The NHL says it will use that period to play the regular season games it had to postpone. 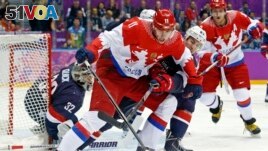 "Our focus and goal have been and must remain to responsibly and safely complete the entirety of the NHL regular season and Stanley Cup playoffs in a timely manner."

This will be the second straight Olympic season the NHL will miss. It did not send players to the 2018 Games in PyeongChang, South Korea, because of a contractual dispute.

Earlier this week, the NHL decided to temporarily stop playing games until after the Christmas holiday to stop the spread of the virus. The league is also bringing back more COVID-19 safety policies, like daily testing and limits on the size of player gatherings.

The league had until January 10 to withdraw from the games without paying a financial penalty. As a result, the men's Olympic hockey tournament will continue without NHL players for the second straight time.

The NHL did not participate in the Olympics until 1998. NHL players played in five Olympics in a row through Sochi in 2014.

During labor negotiations last year, the NHL and players' union agreed to participate in the 2022 Olympics. But the deal was dependent on pandemic conditions not worsening.

A generation of hockey stars, including Swede Victor Hedman, will need to wait until 2026 to play in the Olympic men's hockey tournament for the first time.

"It's a thing you've been looking forward to for a very long time," Hedman said. "For us to not be able to go, it's going to hurt for a while."

The NHL was set to participate in the Olympics until the Delta and Omicron variants began spreading in North America. Before an outbreak in Calgary, Alberta, in early December, only five NHL games needed to be rescheduled.

regular — adj. happening over and over again at the same time or in the same way

manner — n. the way that something is done or happens

tournament— n. a sports competition or series of contests that involves many players or teams and that usually continues for at least several days

athlete— n. a person who is trained in or good at sports, games, or exercises that require physical skill and strength