Update Required To play the media you will need to either update your browser to a recent version or update your Flash plugin.
By Ashley Thompson
22 April, 2016

The death of music superstar Prince shocked and saddened the world yesterday. In his honor, many famous monuments turned purple. The color was chosen in memory of his hit song "Purple Rain."

Yesterday, even Niagara Falls - in Canada - turned purple. People on social media were impressed that such huge waterfalls could turn purple in such short notice.

But, the purple color was not, in fact, meant to honor Prince. The agency that manages Niagara Falls had been planning to make the falls purple on April 21 in honor of Queen Elizabeth II's 90th birthday. Purple is the color of royalty. Canada is a member of the Commonwealth of Nations. 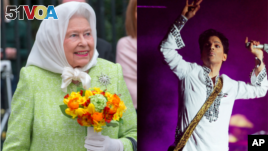 The Canadian travel site Canoe.com wrote on Twitter: "Niagara Falls goes purple for the Queen's birthday -- and, inadvertently, for Prince."

Another Canadian landmark, Toronto's CN Tower, also glowed purple Thursday night. That, too, was for the Queen's birthday. A Toronto politician tweeted the reason:

The confusion has made "Niagara Falls" a trending topic on social media. And, even though it is now clear that officials planned to make the falls purple to honor the Queen's birthday, many people are choosing to believe it was also in memory of Prince.

Ashley Thompson wrote this report for VOA Learning English. Hai Do was the editor.

inadvertently - adv. not planned or intended

glow - v. to shine with a steady light