Words and Their Stories: Nicknames for New Orleans and Las Vegas

Update Required To play the media you will need to either update your browser to a recent version or update your Flash plugin.
By Shelley Gollust
09 June, 2012

Many cities have interesting nicknames. Nicknames can help establish the identity of a city. They can also spread pride among its citizens.

New Orleans, Louisiana probably has more nicknames than any other American city. One web site lists more than twenty nicknames. The most famous is The Big Easy. It describes the gentle, slow and easy-going way of life in New Orleans. 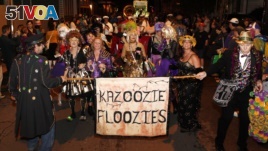 Members of the Krewe du Vieux paraded through the streets of the French Quarter celebrating the Mardi Gras season in New Orleans
So how did the city get this nickname? In the early nineteen hundreds, there was a dance hall in New Orleans called The Big Easy. But the nickname did not become famous until the early nineteen seventies. That was when a Louisiana newspaper writer began calling New Orleans by this name. She compared the easy-going way of life there to the hurried pace of life in New York City.

In nineteen seventy, James Conaway wrote a crime novel called "The Big Easy." The story was set in New Orleans. In nineteen eighty-seven, that book was made into a film which made the nickname even more popular.

New Orleans has other nicknames. One of them is The Crescent City. During the nineteenth century, new neighborhoods expanded out from what is now known as the French Quarter. These areas followed the great curve of the Mississippi River, giving New Orleans the shape of a crescent.

Another nickname is the Birthplace of Jazz because that kind of music started in New Orleans. It is also called Mardi Gras City for the wild celebrations and parades that take place there every year. And, there is a nickname that uses the short way to write New Orleans and Louisiana. It you do not want to use the complete name, you can call the city NOLA.

One of America's most exciting cities is Las Vegas, Nevada. There you can play games of chance all night long. The city's night clubs are also open all night for eating, drinking and dancing. So it is not surprising that Las Vegas is called The Gambling Capital of the World and The Entertainment Capital of the World.

Another nickname for Las Vegas is Sin City because you can find many kinds of adult entertainment there. Many people who come to Las Vegas in hopes of winning lots of money do not know when to stop gambling. They may lose a great deal of their hard-earned money. So the city is also called something that sounds like Las Vegas – Lost Wages.

In nineteen sixty-four, Elvis Presley starred in a movie called "Viva Las Vegas." Here he sings the title song from that movie.