Update Required To play the media you will need to either update your browser to a recent version or update your Flash plugin.
By Hai Do
26 January, 2017


Mexican President Enrique Pena Nieto has cancelled a meeting with the new president of the United States, Donald Trump. The meeting had been planned for next week. Pena Nieto acted shortly after Trump posted on Twitter about plans for building a wall between Mexico and the U.S.

Trump tweeted early Thursday, "If Mexico is unwilling to pay for the badly needed wall, then it would be better to cancel the upcoming meeting."

Pena Nieto later tweeted, "This morning we informed the White House that I will not attend the work meeting planned for next Tuesday with @POTUS." POTUS stands for President of the United States.

Trump administration official Sean Spicer said: "We'll look for a date to schedule something in the future." And he added, "We will keep the lines of communication open."

Jorge Castaneda served as Mexico's foreign relations secretary under its former administration. In his words, "Pena Nieto has no other choice but to say 'I'm not going.'"

Tensions have increased between the two countries since Trump launched his campaign in 2015. Trump had said immigrants from Mexico brought drugs and crime into the U.S. He promised to build a wall to stop them and said Mexico would pay for it. 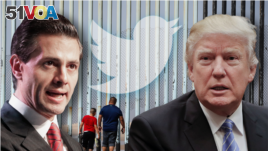 The new U.S. President has also blamed Mexico for taking jobs away from Americans. He wants to re-negotiate the North American Free Trade Agreement or NAFTA. Calling it a "total disaster," he said it costs the U.S. as much as $60 billion each year in trade deficits to Mexico.

On Wednesday, Trump signed an order to build the wall as Mexico's Foreign Minister Luis Videgaray arrived for a meeting with the White House staff.

Republican leaders of the U.S. Congress estimated the cost of building the wall would be between $10 billion to $20 billion. Trump said the U.S. will finance the wall initially. But, he said Mexico will repay the United States.

"There will be a payment, it will be in a form, perhaps a complicated form," Trump said in an interview with ABC News.

Late in the day, a White House spokesman said that Trump is calling for a 20 percent tax on imports from Mexico to pay for the wall.

Hai Do wrote this story for VOA Learning English, based on reports from the Associated Press and Reuters. Caty Weaver was the editor.

schedule - v. to plan at a certain time