Update Required To play the media you will need to either update your browser to a recent version or update your Flash plugin.
By VOA
18 November, 2015


At least 32 people are dead and 80 others were wounded after an explosion Tuesday in Nigeria.

The blast struck a market after sunset in the northeastern city of Yola. No one has claimed responsibility. But NBC News says the explosion was the work of a suicide bomber.

Nigerian officials believe the Islamic militant group Boko Haram is connected to the attack. Boko Haram has killed thousands of people as part of its campaign to try to turn Nigeria into an Islamic state. 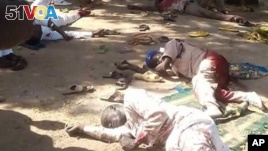 Bodies lies on the ground following a bomb explosion in Yola, Nigeria, Friday, Oct. 23, 2015. Two suicide bombers struck at city mosques in northeast Nigeria on Friday, killing over 40 people and wounding more than 100, an official and witnesses said. (AP/Ibrahim Abdulaziz)

The dead and wounded were taken to hospitals, where family members gathered. Others waited with friends for information about missing relatives.

The president of Nigeria, Muhammadu Buhari, sent sympathy to family members of the dead late Tuesday and called the attack "callous."

This was the first suspected Boko Haram attack in Nigeria in several weeks.

Nigeria recently stepped up its fight against Boko Haram with the help of the United States and French militaries. Nigeria's military has reported killing and capturing possible suicide terrorists.

This report was based on stories from VOANews.com, the Associated Press, NBC News, The New York Times and USA Today. Jim Dresbach wrote this story for Learning English. George Grow was the editor.

passers-by – n. people who happen to be in an area

callous – adj. not feeling or showing any concern about the problems or suffering of other people