Update Required To play the media you will need to either update your browser to a recent version or update your Flash plugin.
By Bryan Lynn
14 October, 2016


Twenty-one schoolgirls kidnapped by the Boko Haram militant group were freed this week after being held for more than two years.

The 21 were part of a group of nearly 300 girls taken by Boko Haram in April 2014 from the town of Chibok in northern Nigeria.

The release was negotiated between the Nigerian government and Boko Haram. The deal was facilitated by the International Committee of the Red Cross and the Swiss government. 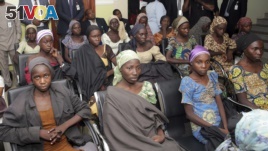 In this photo released by the Nigeria State House, Chibok schoolgirls recently freed from Boko Haram captivity are seen during a meeting with Nigeria's Vice President Yemi Osinbajo, in Abuja, Nigeria, Oct. 13, 2016.

The 21 girls were taken to the capital, where they met Thursday with Nigerian Vice President Yemi Osinbajo. He called the release "very exciting news" for the whole country.

Names of all the girls were to be released as soon as their families were contacted. Health information about the girls was not made public. However, at least one of the girls is reportedly pregnant.

The country's Information Minister, Alhaji Lai Mohammed, said the girls were freed after "painstaking negotiations and trust on both sides."

Nigerian officials said they planned to hold more talks with Boko Haram about the release of more captured girls.

Dozens of the kidnapped girls have been able to escape. The 21 released this week were the first to be rescued as a result of government action.

Boko Haram has led attacks on schools as part of its insurgency. The extremist group has been fighting for seven years to establish an Islamic government in northern Nigeria.

Boko Haram is blamed for the deaths of at least 20,000 people since 2009. More than 2.7 million people have also been displaced in the fighting. 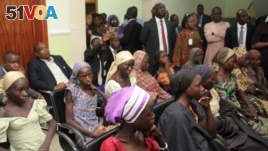 Nigerian vice president, Yemi Osinbajo and other officials meeting with the 21 Chibok girls released by Boko Haram militants October 13, 2016 at the DSS Hospital in Abuja.

Last week, Nigeria's military carried out a number of airstrikes against the group. The offensive took place in the Sambisa forest, a stronghold of Boko Haram, which last year pledged its loyalty to Islamic State.

Bryan Lynn wrote this story for VOA Learning English. His story was based on reports from VOANews, the Associated Press and Reuters. was the editor.

facilitate – v. to make something possible or easier

painstaking – v. done with a lot of thought and care

pledge – v. to formally promise to give or do