Nigerian President Goodluck Jonathan met on Monday with Malala Yousafzai. The young Pakistani activist for women's rights became famous around the world after the Taliban shot her as she travelled to school. Mr. Jonathan promised her that his government will rescue the more than 200 schoolgirls kidnapped by the militant group Boko Haram three months ago. The meeting happened in the Nigerian capital Abuja.

Boko Haram recently released a video message criticizing activists who are calling for the return of the girls.

The kidnapping took place last April, in the Nigerian town of Chibok. Almost 300 schoolgirls were put into trucks by men in military clothing. When the men began burning the schoolhouse, the girls knew the men were not, as they had said, soldiers rescuing them from a planned attack. 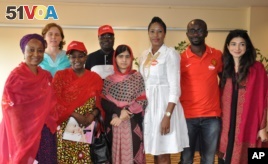 Pakistani activist Malala Yousafzai, who survived being shot by the Taliban because she advocated education for girls, poses for a photograph with the organizers of Bring Back Our Girls campaign, in Abuja, Nigeria, July 13, 2014.

More than 50 girls escaped that night, but more than 200 are still missing.

In Abuja, activists gather daily to demand the return of the girls.

Boko Haram says it is holding the girls and has threatened to sell them as "slaves."

Malala Yousafzai spoke with reporters after her meeting with President Jonathan.

"The president fortunately promised that he will do something for these girls. And he promised me that the girls will be returned as soon as possible."

Ms. Yousafzai was in Nigeria on her 17th birthday. She has become an activist for girls' education. Two years ago, Taliban terrorists shot her in the head for her support of education for girls in Pakistan. The attack angered people around the world. Although she was seriously injured, the attack made Ms. Yousafzai famous.

Malala Yousafzai says she spoke to some of the schoolgirls who escaped. She says although they are free, they are still suffering.

He said the administration has spent more on education than any administration before it. He added that Education is a main area of importance for President Jonathan.

But Ms. Yousafzai says more than 10 million children in Nigeria do not have access to education. She called on the international community and the Nigerian government to give all children the opportunity to attend school.

But much of northeastern Nigeria has been under emergency rule for more than a year. Officials say there are not enough security forces to guard all of the schools. Hundreds of children have been killed in attacks on their schools as they slept.

Abubakar Shekau says he is the leader of Boko Haram. He speaks in a video that was recently released by the group. He smiles as he talks to the activists who are working to bring the girls back.

He is talking about his repeated demand for the release of members of Boko Haram being held by the government.

Also in the video, Abubakar Shekau claims responsibility for bombings last month in the city of Lagos and in the Nigerian capital Abuja. And he threatens Muslim religious leaders who criticize militants.