Update Required To play the media you will need to either update your browser to a recent version or update your Flash plugin.
By VOA
11 June, 2015


The Nigerian military has moved its command center to the northeastern city of Maiduguri, the birthplace of the extremist group Boko Haram.

The new location might be critical to defeating the group and its supporters. Boko Haram has been attacking civilians and Nigerian government forces for six years in an effort to establish its version of Sharia or Islamic law. The militants have killed thousands of people in northeastern Nigeria and displaced thousands more. 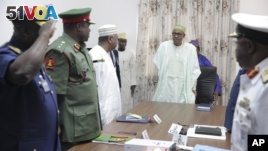 Yan St. Pierre is with the Berlin-based security firm MOSECON. He says the move is an important step for Nigeria's military.

"This is a huge move, it's a very intelligent move, and should have been done, in my opinion, a long time ago. It's only a temporary move, but it's a very smart one, and it's going to cut a lot of the bureaucratic decisions, it's going to speed up the process and it's definitely going to be a boost to the soldiers knowing that the commanding officers are actually on-site as well."

Mr. Buhari used the issue of Boko Haram to defeat former President Goodluck Jonathan in the election last March. During Mr. Jonathan's leadership, the militant group was able to capture huge parts of northeastern Nigeria. Nigerian soldiers and troops and fighters from neighboring countries took back most of that territory in the months just before the vote.

Alkasim Abdulkadir is a reporter and security expert. He says there was little direction of military planning and budgeting for the fight against Boko Haram. He says President Buhari should be able do that better from Maiduguri.

"So one thing that we might see here is the president, being a former army general himself, would have an idea how these things are done."

The president and his generals have much difficult work in the weeks to come. Boko Haram has continued to carry out attacks since the presidential inauguration May 29. The violence has included suicide bombings and rocket bombardments in Maiduguri.

Chris Stein reported this story from Dakar, Senegal. Caty Weaver wrote it for Learning English. George Grow was the editor.

bureaucratic – adj. using or connected with many complex rules and ways of doing things to operate a government

boost – v. to increase the force, power or amount of (something)

bombardment – n. to hit or attack (something or someone) repeatedly