Update Required To play the media you will need to either update your browser to a recent version or update your Flash plugin.
By Phil Dierking
12 August, 2018

But some activists are turning Boko Haram's target into a weapon. In 2014, Rebecca Gadzama and her husband started a group called Education Must Continue, or EMC. It aims to bring quality education to an area where Boko Haram militants have destroyed most of the government schools.

"We are just private individuals, just good citizens, natives of this area, so...because we weren't sure when the government would start their school, we just found this place," Gadzama said.

EMC manages two schools for displaced children, one in Lassa and one in the city of Yola. Gadzama said the schools have 1,600 students and 80 teachers.

The teachers sometimes meet outdoors, under trees in open fields. The location gives them a chance to see danger and run in case of an attack.

But classes with students are held under roofs, either in newly built buildings or tents provided by the government. 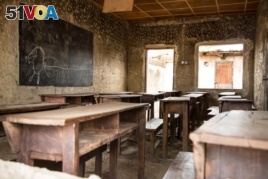 A classroom in the EMCI school in Lassa, where much of the help comes from nongovernmental organizations.

Except for the tents, the schools are supported mostly by donations. One reason, Gadzama says, is because the government does not appear to be rebuilding in the Lassa area.

She thinks the little help might be because Lassa is a mostly Christian town, while the majority of people in northern Nigeria are Muslim. When Boko Haram launched its violent insurgency in 2009, Christians and their churches were the group's early targets.

Maimuna Zhubairu is a 23-year-old school teacher from Lassa. Boko Haram killed three of her uncles and her older brother. She feels the government has given up on helping Lassa.

"Most of the help comes from NGOs," she said. "The government, they are not doing much help."

Muhammed Bulama, the Borno state minister of information, says the government has begun working in Lassa, helping to rebuild a church. "Reconstruction is not an event, it is a process," Bulama said, adding that the government has not forgotten about any area.

But he also told VOA the government is overwhelmed by the amount of damage Boko Haram caused: $9 billion in northern Nigeria and $6 billion in Borno state alone.

He said that most of the rebuilding work is done in northern Borno because that is where most of the damage is. He also said parts of southern Borno are still not possible to enter.

Most of the students at EMC schools are Christians still suffering from what they have seen. Some of them want to become soldiers when they get older to punish Boko Haram.

"Boko Haram, I see them use knife, chop my grandfather head," 13-year-old Ibrahim Daniel told VOA, speaking in pidgin English. He adds that he wants to become a soldier. He says if he sees people from Boko Haram, he will kill them.

Sometimes kids in Lassa play war games outside. One side pretends to be soldiers and the others act like Boko Haram.

Rebecca Gadzama, the EMC founder, hopes the school library she is working on will help heal the students' minds.

"It is not an issue of fighting back," she said. "It's an issue of how do we get over this? How do we become one again, because the guys in the Boko Haram are also children."

Part of the answer can be found, Gadzama believes, in education.

This story was originally written by Chika Oduah for VOANews. Phil Dierking adapted the story for Learning English. Kelly Jean Kelly was the editor.

Do you think education can help a community heal after violence? Write to us in the Comments Section or on 51VOA.COM.

allocate - v. to divide and give out (something) for a special reason or to particular people, companies, etc.

chop - v. to cut (something) into pieces by hitting it with the sharp edge of an ax, knife, etc.

counseling - n. advice and support that is given to people to help them deal with problems, make important decisions, etc.

displace - v. to take the job or position of (someone or something)

overwhelm - v. to cause (someone) to have too many things to deal with

psychosocial - adj. relating to the interrelation of social factors and individual thought and behavior.