Update Required To play the media you will need to either update your browser to a recent version or update your Flash plugin.
By Anna Matteo
19 August 2022


During a 2020 COVID lockdown in Lagos, Nigeria, chef Renee Chuks began experimenting with a new pasta recipe. Usually pasta is made from wheat. But instead of wheat, Chuks used crops grown locally, like cassava and plantain, as her pasta base.

Now, she sells the dried food in health food stores and online. She named her business Aldente Africa. She says it is among the first in Nigeria to make gluten-free pasta.

Chuks is part of an international movement to avoid gluten, a protein found in some grains, including wheat. Many people seek wheat substitutes because gluten can create health problems. 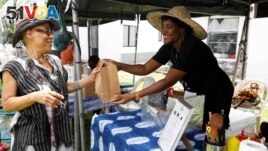 Renee Chuks serves gluten-free pasta made of cassava to a customer during a weekly farmers' in Ikoyi, Lagos, Nigeria June 25, 2022. (REUTERS/Temilade Adelaja)

Cassava is one such substitute for wheat. It is a root vegetable rich in minerals and Vitamin C. Nigeria is one of the world's biggest producers of cassava.

Gluten is a protein found in wheat and some other grains. Humans digestive systems cannot break down gluten completely. While this is not a problem for most people, some people get sick from undigested gluten. One example is an autoimmune response to gluten called celiac disease. Celiac can damage the small intestine.

However, Chuks has other goals besides avoiding gluten. She says Africa should use more locally grown crops to help improve food security on the continent. African countries, she adds, need to consider the foods they eat every day --- like cassava.

Chuks said, "We figured, let's start with that. If we are able to get good success with cassava then everything else will follow."

The chef also found that plantain and the small grain fonio works well for pasta-making. She adds local herbs and vegetables for taste and color. Some of her pastas are green or pink.

Chuk's company also produces wines made from hibiscus plants, as well as herbs for cooking.

pasta – n. a dough of flour, eggs, and water made in different shapes and dried or used fresh

recipe – n. a set of instructions for making something (as a food dish) by combining various things

digestion – n. the body's process or power of changing food into simpler forms that can be taken up and used : digestive – adj. relating to or functioning in digestion

herb – n. a plant or plant part used in medicine or in seasoning foods

wine – n. an alcoholic beverage made from the fermented juice of grapes