Update Required To play the media you will need to either update your browser to a recent version or update your Flash plugin.
By VOA
12 February, 2013

Nigerian doctor Uche Amazigo has received the Prince Mahidol Award for outstanding efforts in public health. Dr. Amazigo recently traveled to Thailand to receive the award. She has been a leader in sub-Saharan Africa in the fight against the disease known as river blindness.

The disease begins when people are bitten by the black flies that spread the infection. The disease is known as river blindness because the flies live near fast-moving rivers and streams. 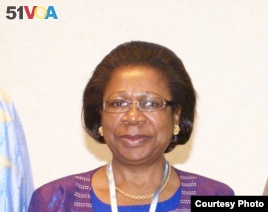 Doctor Uche Amazigo during a meeting of health experts in Abuja, Nigeria, 2009 file photo. (Credit: WHO)
Tiny worms spread throughout the body. This incites the body's immune system to attempt to fight the invader. But the body's intense immune response can destroy the eye nerves.

The cause of the disease was first identified in Guatemala almost 100 years ago. River blindness continues to be a serious health problem in many African nations and in Yemen.

Medical treatment lasting as long as 20 years is necessary to keep victims free from the parasite that causes the disease.

Dr. Amazigo is a former director of the World Health Organization's African Program on Onchocerciasis. That is the medical name for river blindness.

She describes how medical workers have sometimes had to struggle to deliver medicine, vitamin A and bed nets, to protect against the flies.

In 1987, the drug manufacturer Merck launched a program to provide a medicine called ivermectin to all those affected by the disease. The company said it would provide the treatment for free as long as necessary through the community directed program.

The infection not only causes blindness. It also causes a painful skin disease. Doctor Amazigo says the effects are especially difficult for women. Women are often socially rejected when their skin shows early signs of the disease.

But she says victims are more accepted now. She also says health providers and governments recognize community operations as very important to educating more than 120 million people at risk for the disease.
Related Articles
go top