Update Required To play the media you will need to either update your browser to a recent version or update your Flash plugin.
By Phil Dierking
01 March, 2018


Activists in Nigeria are seeking stronger laws to punish those found guilty of sexually abusing children. Their appeals come as some families break the culture of silence surrounding the issue and demanding justice for the victims.

Mercy Philip will never forget January 12, 2017. That day her eight-year-old daughter came to her and asked if she could wash her underwear.

After Philip asked why, the girl said a male neighbor had "climbed on her body" and then told her to wash the underwear.

The mother immediately took her daughter to a health center. A short time later, Philip and her husband went to the police. The neighbor was arrested and is now waiting to be tried.

However, the family's life has only become more complex.

They have been criticized by other neighbors, pressured to drop the charges, and condemned for "trying to ruin a man's life," Philip said. When her daughter leaves home, people laugh or throw rocks at her, she added.

"To settle means to forget about it. Let sleeping dogs lie," said Bukola Ajao, the Philips' lawyer. "Please, we are sorry, but this kind of matter is not something that you just apologize for."

The most recent records available on child sex abuse in Nigeria are from 2014. They come from Nigeria's National Population Commission, the United Nations Children's Fund and America's Centers for Disease Control and Prevention. Those studies showed that one in four girls and one in 10 boys in Nigeria experience some kind of sexual violence before the age of 18. 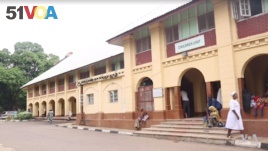 "Nearly on a daily basis, there would be one form of abuse or the other," she noted. She added that it is worrying because not many cases actually get reported to a hospital.

Activists are urging Kaduna state to approve the federal Child Rights Act of 2003. It requires a 14-year jail sentence for anyone found guilty of child sex abuse, and life in prison for rape.

Kaduna and 10 other states in Northern Nigeria have yet to approve the act. Instead, those states use religious Islamic courts as well as a system of rules from British colonial rule to try those accused of child sex abuse.

Hajia Hafsatu Mohammed Baba is Kaduna's State Minister of Women and Social Development. She told VOA the state government wants to pass the act. But the Supreme Sharia Council says the federal rule is a Western import and an attempt to restrict religious courts.

"You know how things are around here. Things like this can never be buried," said Asabe Musa, whose daughter was abused when she was five years old. "This is the kind of story that goes around...maybe when the girl does find someone to marry, someone will go and tell his family what happened to her."

Hauwa Hassan owns and operates an orphanage, which cares for children who have lost both parents. For the past 10 years, Hassan has worked with about 20 families dealing with child sex abuse. She says only three of them took her advice to go to court, and those families are still waiting for a final ruling.

One young woman living at the orphanage, named Ladi, left her home after her father raped her daughter.

Ladi cannot return to her village because her father is a chief there. But she is not alone.

One 7-year-old at the orphanage said he was walking to school when an old fruit seller persuaded him to go to the back of his business. The abuse continued until the boy told an uncle about pains in his body.

The uncle, Anas Abdullahi Umar, said he went to the police. He said a lot of his friends first suggested they go beat up the accused abuser. But he did not want to take the law into his own hands. Others told him to forget about the case, but he refused that idea.

The court found the fruit seller guilty under a colonial-era sodomy law. He was unable to pay the 80,000 naira fine (about $200), so he is serving a three-year jail sentence.

"That is what he deserved...The judgment passed was not enough but still, I thank God there was some sort of judgment," Umar said.

Chika Oduah reported this story for VOANews. Phil Dierking adapted the report for Learning English. George Grow was the editor.

What do you think the best way us to deal with sexual abuse in countries with stigma against it? We want to hear from you. Write to us in the Comments Section or on 51VOA.COM.

ridicule - v. the act of making fun of someone or something in a cruel or harsh way

stigma - n. a set of negative and often unfair beliefs that a society or group of people have about something