Update Required To play the media you will need to either update your browser to a recent version or update your Flash plugin.
By Ashley Thompson
02 March 2021


Hundreds of Nigerian girls who were kidnapped last week from a school in the country's northwestern Zamfara state have been released.

The leader of Zamfara state announced the girls' release on Tuesday. There has been a series of such kidnappings in the West African nation in recent years.

The girls, aged 10 and up, gathered in Zamfara state's Government House conference room. They appeared calm, talking to one another while reporters took pictures of them. They will receive a medical examination before they are returned to their parents. 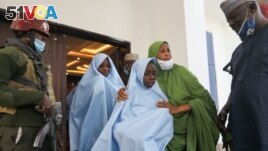 An official embraces a girl who was kidnapped from a boarding school in the northwest Nigerian state of Zamfara, as she heads for a medical check-up after her release in Zamfara, Nigeria March 2, 2021. (REUTERS/Afolabi Sotunde)

Zamfara Governor Bello Matawalle said that 279 girls had been freed after being taken from the Government Girls Junior Secondary School in Jangebe town on Friday.

The government last week said 317 had been kidnapped. It was not clear if the higher number was a mistake or if some girls were still missing.

"Alhamdulillah! (God be praised!) It gladdens my heart to announce the release of the abducted students," Matawalle said in a Twitter message early Tuesday.

Officials said "bandits" were behind the abduction. The officials were describing the groups of armed men who operate in Zamfara state. The men kidnap people for money or to demand the release of jailed group members.

One of the freed girls described the night of the abduction to the Associated Press. "We were sleeping at night when suddenly we started hearing gunshots," she said. "They were shooting endlessly. We got out of our beds and people said we should run, that they are thieves."

The attackers soon found her and some classmates and held guns to their heads, she said. "I was really afraid of being shot."

Officials ended the interview before the girl could give her name to AP reporters.

Nigeria has had several such attacks and kidnappings in recent years. In 2014, Boko Haram members abducted 276 girls from a secondary school in Borno state. More than 100 of those girls are still missing.

Boko Haram is opposed to western education and its fighters often target schools. But most of the attacks that happen in the northwest are carried out by armed criminal groups.

Officials did not say if money had been paid for the release of the girls.

"We have been in discussion since Friday with the abductors and reached agreement on Monday," the governor said. He also said that he would put in place additional security at all schools in the state.

Nigerian President Muhammadu Buhari expressed "overwhelming joy" over the release of the girls. The president also called for a stronger effort to prevent bandits from carrying out such attacks. He warned that paying ransom money for the release of victims would only result in more attacks.

Ernest Ereke is with the University of Abuja in Nigeria. He agreed that ransom payments let criminal groups buy more weapons and expand their power. He added that the Nigerian government increasingly looks too weak to act.

"It should be the other way around, that is, the criminals should be scared of the state," he said. "But, in this case, it is the state that is scared of criminals."

located –v. to be in a particular place

gladden –v. to make someone glad or happy

abduct -–v. to take someone away from a place by force

bandit –n. a criminal who attacks and steals from travelers

interview –n. a meeting between a news reporter and another person or people to gain information

ransom –n. money that is paid to free someone who has been captured or kidnapped