Update Required To play the media you will need to either update your browser to a recent version or update your Flash plugin.
By Jonathan Evans
04 April 2021


Until recently, Shade Ajayi had never gone to school. Now 50, the businesswoman is learning to read and write alongside students nearly 40 years younger than she is.

Ajayi attends a school in Ilorin, in Nigeria's western Kwara state. She wears the same uniform, or school clothing, as hundreds of girls at the school: a pink dress and head covering.

"I'm not ashamed that I wear a uniform," she said.

As a child, Ajayi worked in her aunt's shop instead of attending school. She now runs her own business making and selling purses and bags. But she believes her inability to read or write is holding her back.

Ajayi signed up to attend school last year, but the school closed because of the coronavirus pandemic. Schools reopened in January and Ajayi finally got her chance.

She sits in a class with students aged 11 to 13 and raises her hand to answer questions.

Ajayi's teacher, Nasrat Busari, said she did not appear worried about the age difference with other students.

"She has been coping well with them: playing together, talking together and discussing things together," he said.

Ajayi's daughter, Shola Adeboye, said at first, she was embarrassed that her mother attended school alongside children. But later, she supported her mother's efforts.

"She has always wanted to be educated but she couldn't (until now)," Adeboye said. 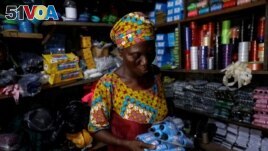 hade Ajayi, 50, shops for thread for her bag-making business, at a store in Ilorin, Kwara state, March, 26, 2021. REUTERS/Temilade Adelaja

She plans to continue her education for four more years, saying it will help her business.

"People around me can read and write and they are succeeding in their businesses," said Ajayi.

And she does not seem to care what others may say about her. Ajayi said, "It's my duty not to pay attention to what they're saying."

coping – v. dealing with and trying to find solutions for problems

embarrassed – adj. feeling or showing a state of self-conscious confusion and distress