Update Required To play the media you will need to either update your browser to a recent version or update your Flash plugin.
By Jim Dresbach
06 November, 2015


Villagers in the Niger River Delta area of Nigeria say they live in unclean conditions because oil companies have not cleaned up spills.

The claims against Shell Oil Company and Italian Oil's ENI were published in a report earlier this year by Amnesty International, a rights group.

Shell blames the pollution on oil theft and illegal refining. Shell and ENI admitted to more than 550 oil spills in the Niger Delta last year.

Documents released in a legal action in Britain showed Shell knew of pipeline problems in Nigeria. The documents said the company knew one of its main pipelines was old and dangerous. 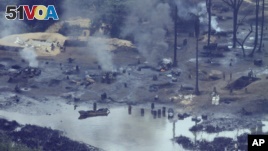 Smoke rises from an illegal oil refinery in Ogoniland, outside Port Harcourt, in Nigeria's Delta region in this Thursday, March 24, 2011 photo. Shell flew journalists in a helicopter over a cleared area in the delta where locals ran makeshift refineries turning stolen crude tapped from pipelines into diesel and kerosene. The company blamed nearly all of its oil spills in 2009 on sabotage from thieves and militants. Environmentalists and community activists routinely blame Shell for the spills, pointing at the company's aging pipelines and poor cleanup efforts. (AP Photo/Sunday Alamba)

Five pipelines meet at one of the sites, called the Bomu manifold. It is near the village of Kegbara Dere and is called Nigeria's "oil central." The pipelines carry 150,000 barrels of oil a day to an export terminal.

Rusty pumps and 50-year-old pipes increase the chance for spills. Over the past five years, the Bomu manifold site continues to be contaminated.

Shell operates almost 50 oil fields in the Niger delta. The company also owns 5,000 kilometers of pipeline. Shell's own investigation reported 1,693 oil spills and 350,000 lost barrels of oil in the area.

Jim Dresbach wrote this story for Learning English, using information from Amnesty.org and TheGuardian.com. Kathleen Struck was the editor.

delta – n. a piece of land shaped like a triangle that is formed when a river splits into smaller rivers before it flows into an ocean

theft – n. the act or crime of stealing

manifold – n. a device that diverts oil or gas, without flow interruption, from the well for disposal

terminal – n. a central area to which oil is moved for distribution

rusty – adj. covered with rust, a reddish substance that forms on iron or other metals, usually when it comes in contact with moisture or air