Update Required To play the media you will need to either update your browser to a recent version or update your Flash plugin.
By Christopher Jones-Cruise
18 February, 2017


Millions of single people turn to the Internet to meet other singles.

Many use dating websites in hopes of finding that special someone. But there are some people who want nothing more than to trick singles, using their desire for a loving relationship to get their money.

VOA recently investigated one such effort. Criminals used pictures of United States armed forces members to steal money from women around the world. 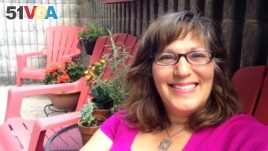 Lilo Schuster was tricked into sending thousands of dollars to a computer criminal in 2009. (Photo/Lilo Schuster)

One of those women is Lilo Schuster. She began looking online to try to find a boyfriend or a husband.

Then one day, Schuster received a promising email from someone on a dating website. The message came from someone who claimed he was a pilot in Afghanistan.

"And it was a widow(er), and he said that he was in the Air Force, that he was fighting the Taliban -- the terrorists -- that he had a, a daughter. I just thought ‘Oh my, my prayers are being answered.'"

The relationship quickly became serious. Schuster said she fell in love. She soon began sending the man emails throughout the day. He sent her poetry and messages saying he loved her. He even sent her pictures of himself in his military clothing.

"As soon as I had the pictures, I would -- this is so stupid -- I would carry them around. I would show people."

Schuster noticed that the man did not write well. But she remembered her father was an immigrant, and his writing was not very good. So she did not think it was a problem.

But she and her love interest never spoke by telephone. When she asked to do so, the man said he was not permitted to do so.

"We never talked, we never Skyped because his thing was ‘Well, this is top secret, we're fighting the terrorists, we can't do anything that would compromise that so I can't use the phone.'"

After a few weeks, the man told her he needed money to help his daughter go on a school trip. So she sent a few thousand dollars to Britain, where the man said his mother lived with his daughter.

"I'm helping him. This is for our future. It's embarrassing but that's the feelings that I was feeling."

But after she sent the money, the man asked for more. He said he wanted to leave the Air Force and join some of his friends who were starting a small company.

The man told Schuster that the Air Force would not let him remove money from his bank account. He said he needed her help. She was suspicious, but she still sent more money to him.

"You're so scared. You don't want to lose them -- you'll just do anything, and that's what I did. So I just started to continue to wire money."

Schuster sent a total of $22,000. Almost immediately after she sent the last amount, he stopped sending her emails.

"My heart just sank and I thought ‘this doesn't seem right.'"

Chris Grey is with the U.S. Army's Criminal Investigations Command. He says he has heard stories like Schuster's many times.

"It's been just overwhelming. We are dealing with thousands of these. I've personally spoken to women who've given upwards of $75,000, $80,000 to someone that they've never met in person."

Online criminals are also targeting people in other countries. Grey says women from Japan, Britain and Australia have called his office. He says they thought they were in love with a U.S. service member but were actually being tricked.

Grey says many of these criminals operate from "cyber cafes" in West African countries like Nigeria and Ghana. He says they take photographs of U.S. troops from social media. They then create a story and begin to target women on dating sites.

Grey has some simple advice: "Never send money to someone that you've never met, never talked to on the phone."

Grey says there are several signs to watch for. They include misspellings on documents and mistakes with capitalization. Other signs include using names of organizations that do not exist or using logos that are in disagreement with official images or designs.

Grey says cyber criminals sometimes send documents with U.S. Army logos when the writer claims to be serving in the Navy.

Schuster turned her anger into action. By sharing her story, she says she helped a woman in New Zealand and an American discover that they were being lied to.

"Same story and the same exact pictures were used to these two other women."

If you suspect you are being tricked by someone online, do not send them money -- especially if they are in another country. You should call police or postal officials.

date – v. to do an activity with someone you have or might have a romantic relationship with; to go on a date or several dates with (someone)

compromise – v. to expose (something) to risk or danger

upwards of – adv. more than (an amount or number)

cyber café – n. a café or coffee shop where customers can use computers to search the Internet

misspell – v. to spell (a word or name) incorrectly

capitalize – v. to begin (a word or name) with a capital letter

logo – n. a symbol that is used to identify a company and that appears on its products