No. 1 Killer Among Youth? Traffic Accidents

Update Required To play the media you will need to either update your browser to a recent version or update your Flash plugin.
By VOA
23 October, 2015

But the World Health Organization (WHO) says they are preventable.

The report surveyed 180 countries, and it shows the number of annual deaths from traffic crashes is stabilizing. And that is good news as the number of motor vehicles grows worldwide. 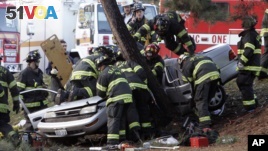 Seattle Fire Dept. firefighters swarm over a car as they work to cut passengers from the wreckage after the vehicle smashed into a tree just short of a pedestrian path at Green Lake park in Seattle, Thursday, Dec. 21, 2006. Three young men were critically injured in the crash, which closed northbound Aurora Avenue. (AP Photo/Elaine Thompson)

But the data also show that road crashes are the No. 1 cause of death among young people aged 15 to 29.

Young adults around the world are the worst driving risks. Even in the U.S., drivers aged 15 to 24 account for about 30 percent of all driving-related accidents.

The WHO report also finds a big gap in road safety and deaths between poor and rich countries. Poor countries have only 54 percent of the world's vehicles. But those countries have some of the worst safety statistics in the report.

"Africa has only two percent of the world's vehicles, but has the highest death rate on the road." That is what Etienne Krug, the head of the WHO Department of Non-communicable Diseases, says.

Sweden, the Netherlands and the United Kingdom are leaders in preventing traffic deaths. The highest death rates are in Africa and the Middle East.

Some of those laws include banning drunk driving, requiring cyclists and motorcycle drivers to wear helmets and making safety belts mandatory in all vehicles.

There are other ways to make roads safer. Good trauma care after a crash can cut the number of deaths from road injuries in half.

The statistics are part of the "Global Status Report on Road Safety 2015," launched on Monday in Geneva.

trauma – n. a serious injury to a person's body

helmet – n. a hard hat that is worn to protect your head

traffic – n. all the vehicles driving along a certain road or in a certain area

Could you reduce deaths from traffic accidents where you live? How do young people drive in your country? Let us know in the Comments Section or on 51VOA.COM.