Nobel in Chemistry Goes to Makers of “World’s Smallest Machines”

Update Required To play the media you will need to either update your browser to a recent version or update your Flash plugin.
By George Grow
05 October, 2016


Three scientists have won the Nobel Prize in Chemistry for their work in developing tiny machines.

They designed extremely thin molecular machines. The machines are said to be 1,000 times thinner than a single piece of hair and have parts that move when energy is added. 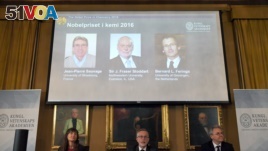 The Royal Swedish Academy of Sciences said the scientists' work could lead to developments in new materials and energy storage systems.

The science of making things unimaginably small is called nanotechnology. Nanotechnology gets its name from a measure of distance. A nanometer, or nano, is one-thousand-millionth of a meter, about the size of atoms and molecules.

Jean-Paul Sauvage of France is a retired professor at the University of Strasbourg. He began the work on a molecular machine in 1983 when he successfully linked together two molecules shaped like a circle or ring. It marked the first time chemists were able to make a molecule act in such a way.

Fraser Stoddart is a professor of chemistry at Northwestern University in the United States. In 1991, he built on Sauvage's work. He found a way to move the molecular ring onto a molecular axle and was able to move the ring along the axle.

Bernard Feringa is a professor of organic chemistry at the University of Groningen in the Netherlands. In 1999, he developed a molecular motor. It used a molecular blade that turned continuously in the same direction.

Sara Snogerup Linse explained the importance of their work to reporters in Stockholm.

"Maybe this morning you ground your coffee, maybe you used a motorized vehicle to get here - you used man-made machines operating on the centimeter to meter length scale. It's been a dream of scientists for over half a century to take this development all the way down to the molecular scale - that's nanometers. A nanometer is one million times smaller than a millimeter..."

Snogerup Linse is chair of the Nobel Chemistry Committee.

Sauvage, Stoddart and Feringa will share a $930,000 prize for their work. They will also receive a medal and diploma at an award ceremony on December 10.

Joshua Fatzick reported on this story for VOANews. George Grow adapted his report for Learning English. Caty Weaver was the editor.

ring – n. an object in the shape of a circle

axle – n. a long, straight object on which a wheel or other wheels turn

blade – n. a flat, turning part that is used on some machines to push air or water

diploma – n. a document given in recognition of something