Update Required To play the media you will need to either update your browser to a recent version or update your Flash plugin.
By Mario Ritter
12 October, 2016


Two professors at American universities have won the Nobel Prize in Economic Sciences. They were honored for their work on business agreements that affect billions of people worldwide: contracts.

"The Royal Swedish Academy of Sciences has decided to award the Sveriges Richsbank Prize in Economic Sciences in Memory of Alfred Nobel for 2016 to Oliver Hart and Bengt Holmstrom for their contributions to contract theory."

Goran Hansson, the Secretary General of the Royal Swedish Academy of Sciences announced the prize Monday. 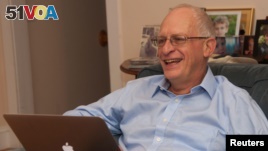 Oliver Hart is a professor at Harvard University. Bengt Holmstrom is at the nearby Massachusetts Institute of Technology, or M.I.T.

The Royal Swedish Academy of Sciences said the prize was awarded for work on the theory of contracts. These agreements affect almost every part of modern life.

Hart and Holmstrom developed a theory for understanding how contracts work. Their research has been used to design contracts. It relates to contracts in private markets and in public policy.

Contracts are agreements between a principal and an agent. One example of this relationship is the one between an employer and an employee.

The leader of a company and its shareholders also have a contractual agreement.

Hart and Holmstrom's work raised questions about tying the pay of high-level officials to a company's current profits. They found that performance-based pay might not be the best policy in some cases. Doing so, may give a business leader an incentive to make decisions that increase profits for a short period of time. Those same decisions may harm the company over the long term.

The two also studied insurance contracts. They argued that people may become careless if insurance companies fully replaced things that are damaged in an accident, such as cars. So, insurance companies often have contract holders pay a deductible toward repair. Insurers also limit what they are willing pay for or replace in many cases.

Holmstrom worked with others to describe how contracts meant to improve one kind of performance can hurt overall job performance. For example, if teacher pay is tied to student test scores then many other parts of a teacher's job could be negatively affected.

Hart and Holmstrom worked together to show that contracts cannot describe every part of a job. Contracts are in some ways always incomplete.

The two said contracts cannot predict every need and requirement in the future. Holmstrom researched the subject for many years. He advised that contracts should make clear what needs to be done to deal with future disagreements between parties rather than center on specific requirements.

The new Nobel prize winners also examined whether some jobs are better done by government or private industry.

In 1997, Hart worked with others in a study that showed the incentive to reduce costs is usually stronger among private contractors. The research called into question the policy of some privately run public services, like prisons.

The Nobel committee praised Hart and Holmstrom for providing the tools to think about and design better contracts in many different fields.

Oliver Hart was born in London. He spent much of his professional life at American universities. Co-winner Bengt Holmstrom was born in Helsinki, Finland. He also spent most of his career in the United States.

The two will share the economics prize worth $924,000. It is the only Nobel prize not established by Alfred Nobel. Sweden's central bank established the prize in his honor.

The Nobel prize for literature will be announced Thursday.

Richard Green reported this story for VOA News. Mario Ritter adapted it for Learning English. Caty Weaver was the editor.

principal – n. a person or group who has responsibility as a guarantor of something such as payment

contribution – n. something that is done to cause something to happen

agent – n. someone acting on behalf of someone else

incentive – n. a reason to do something

deductible – n. an amount of a claim not paid by an insurance company