Update Required To play the media you will need to either update your browser to a recent version or update your Flash plugin.
By VOA
19 October, 2015


North Korea has rejected the idea of international talks to end its nuclear program.

Instead, the North Korean government is calling on the United States to negotiate a peace treaty.

The call for a treaty was part of a North Korean Foreign Ministry reaction to comments made in Washington last Friday. That was when U.S. President Barack Obama and South Korean President Park Geun-Hye said they were ready to engage North Korea. The presidents said they would work with the North if the government agreed to give up its nuclear weapons. 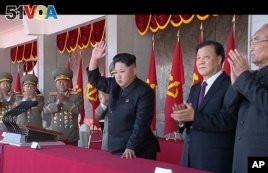 In an image made from video, North Korean leader Kim Jong Un, center, and Liu Yunshan, China's Communist Party's No. 5 leader, second right, waves during a ceremony to mark the 70th anniversary of the country's ruling party, in Pyongyang, Oct. 10, 2015. (KRT via AP Video)

North Korea agreed 10 years ago to end its nuclear program in exchange for economic aid and security guarantees. The North Korean government negotiated the 2005 deal with five countries. They are China, Japan, Russia, South Korea and the United States.

North Korea violated the agreement in 2006, 2009 and 2013. In those years, the North Koreans carried out nuclear tests. This resulted in the United Nations Security Council ordering sanctions designed to punish the North.

In a statement, the North Korean government said the best way forward is for the United States to negotiate a peace treaty. The treaty would replace the 1953 armistice between the North and the South.

The two Koreas remain at war under the truce. North Korea said a peace treaty could reduce tensions. It also said that such a deal "would finally put an end to the nuclear arms race."

The statement also said international sanctions and pressure would not bring North Korea to negotiations. It said, "If the United States insists on taking a different path, the Korean peninsula will only see our limited nuclear deterrent being strengthened further."

Peace treaty can be first step to reduce tensions

Chung-in Moon teaches political science at Yonsei University in Seoul. He is a supporter of a peace treaty between North Korea and South Korea.

"North Korea will never give up its nuclear weapons unless their security concerns are addressed," he said. "And the best way of addressing North Korea's security concern is to have some sort of talks regarding the creation of a peace regime on the Korean peninsula."

Mr. Moon said now is the time to try a new plan of action. He noted that North Korea has shown a cooperative behavior in holding recent family reunions with South Korea. The North has also decided to hold off on rocket launches.

Negotiating a peace treaty would still be difficult. Both South and North Korea claim the entire peninsula.

North Korea's call for a negotiated treaty with the U.S. government does not identify South Korea or China by name. Those four countries signed the 1953 armistice.

sanctions – n. an action that is taken to force a country to obey international laws

addressed – v. to deal with; to give attention to

peninsula - n. a piece of land that is almost completely surrounded by water