Update Required To play the media you will need to either update your browser to a recent version or update your Flash plugin.
By Jim Dresbach
22 April, 2016


A top U.S. military official said North Korea will one day have nuclear-armed missiles capable of reaching all its enemies.

U.S. Army General Vincent Brooks is the commander of the U.S. Pacific Command. He told members of Congress the North Koreans are working to improve their nuclear missile program.

Brooks told the Senate Armed Services Committee, "Over time, I believe we are going to see them acquire [ICBM] capabilities if they are not stopped"

ICBM stands for intercontinental ballistic missile. These missiles can be fired from one continent and land on another. 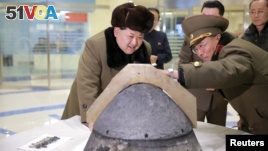 North Korean leader Kim Jong Un looks at a rocket warhead tip after a simulated test of atmospheric re-entry of a ballistic missile, at an unidentified location in this undated photo released by North Korea's Korean Central News Agency (KCNA).

Brooks did not say when the North Koreans would be able to launch long-range nuclear missiles.

General Brooks has been nominated by U.S. Secretary of Defense Ash Carter to lead the U.S. military in South Korea.

ICBM – n. a type of missile that can fly from one continent to another

immaturity – adj. having or showing a lack of emotional maturity

unpredictability – n. not capable of being known before happening or being done