Update Required To play the media you will need to either update your browser to a recent version or update your Flash plugin.
By Hai Do
19 May 2022


Most of the world has been dealing with COVID-19 since early 2020. But North Korea only recently admitted it is dealing with a widespread local outbreak of the disease.

On Thursday, North Korean health officials said over 2 million people have been sickened with a fast-spreading fever since late April. They also said 63 people have died. North Korea said it has quarantined over 740,000 people suspected of having the fever-causing illness.

A fever, or high body temperature, is a common sign of COVID-19 infection. 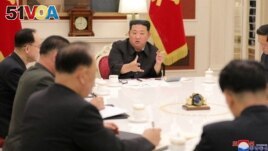 North Korean leader Kim Jong Un recently appeared in public with a protective face covering. During a visit to a drugstore, he said he regretted that officials were slow in getting medicine to people. Officials who work for Kim have urged people with mild symptoms to drink special kinds of tea known as willow leaf and honeysuckle.

Observers say North Korea's poor, unvaccinated population is fearful of a rise in COVID-19 in their country.

Kang Mi-jin is a North Korean defector. She told The Associated Press that she has talked with contacts in the North Korean city of Hyesan.

"North Koreans know so many people around the world have died because of COVID-19, so they have fear that some of them could die, too," she said. Some have bought traditional medicine to deal with their worries.

State media said one million public workers went out to identify suspected patients. State media also has reported that the military has helped with getting medicines to the drugstores.

State television aired infomercials advising people to see doctors if they have breathing problems, spit up blood, or pass out. They also explain what medicines patients can take, including homemade treatments such as honey tea.

The country's main newspaper, Rodong Sinmun, advised people with mild symptoms to boil 4 to 5 grams of willow or honeysuckle leaves in hot water and drink that three times a day.

"Their guidelines don't make sense at all. It's like the government is asking people to contact doctors only if they have breathing difficulties, which means just before they die," said former North Korean agriculture official Cho Chung Hui, who fled to South Korea in 2011. "My heart aches when I think about my brother and sister in North Korea and their suffering."

Since May 12, North Korea has banned travel between areas of the country. But it has not attempted to put in place more severe lockdowns like neighboring China has done.

North Korea's economy is struggling because of pandemic border closures, years of mismanagement, and international sanctions against the country because of its nuclear program.

Because of the economic situation, the country's leaders have pressed for farming, building and other industrial activities to continue.

The office of the U.N. High Commissioner for Human Rights expressed worry this week that pandemic restrictions will hurt people in North Korea. "Children, lactating mothers, older people, the homeless and those living in more isolated rural and border areas are especially vulnerable," the office said in a statement.

Defectors in South Korea say they worry about their loved ones back in North Korea. "My father and sibling are still in North Korea and I'm worrying about them a lot because they weren't inoculated and there aren't many medicines there," said Kang Na-ra, who fled to South Korea in late 2014. She was recently told that her grandmother in the North died of pneumonia last September. Kang believes her grandmother's sickness was caused by COVID-19.

Defector Choi Song-juk said she was not able to contact her sister in the North. "I feel so sad. I must connect with her again because she must be without food and picking wild greens," said Choi, who left North Korea in 2015.

In recent years, North Korea has built some modern hospitals and improved its medical systems. But critics say they are mostly for the country's ruling class. Free medical service for the masses remains limited.

Recent defectors say people do not trust drugs produced in North Korea because of quality issues. But foreign medications from South Korea, China and Russia are costly. "If you are sick in North Korea, we often say you will die," Choi said.

So far, North Korea has not publicly answered offers of medical help from South Korea and the United States.

Choi Jung Hun is a former North Korean doctor who resettled in South Korea. He is now a researcher in Seoul. He suspects North Korea is underreporting the effects of COVID-19.

Hai Do adapted this story for Learning English based on reporting from the Associated Press.

quarantine - v. to keep a person away from others to prevent a disease from spreading

sanction - n. an action taken to force a country to obey international laws by limiting trade or aide to thew country

inoculate - v. to give vaccine shot

toll - n. the number of people who are killed