North Korea for Your Next Vacation?

Update Required To play the media you will need to either update your browser to a recent version or update your Flash plugin.
By VOA
29 June, 2014

Are you bored with all the beaches and European tours? Are you looking for a different place to go for your next vacation, a place that is "off the beaten path"?

Well, a camping trip in North Korea might be just what you are looking for.

North Korea is known for being closed off from the rest of the world. For many years, it has kept foreigners from entering the country.

But earlier this year, everything changed.

North Korea allows tourists to go on camping trips in the scenic mountains of Myohyang and Kumgang.

Koryo Tours is a touring company based in Beijing, China. Their website says they can "take you to the most mysterious country on the planet." Koryo Tours organized the first 10-day camping trip to North Korea earlier this year. It claims this is the first time anyone has been allowed to set up a tent and stay in the mountains of North Korea. 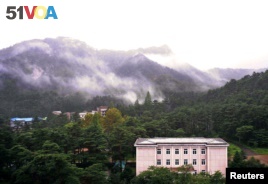 The website for Koryo Tours reads, "This was as much a treat for the guides as they had never done this before either."

Ten westerners went on the trip. They hiked 79 kilometers during the entire tour, which breaks down to be about 28 km per day. The travelers also visited landmarks in both mountains, such as the Kumgang Waterfall and Lake Sam Il Po.

The reason for the increase in tourism is simple – money. More foreign tourists equal more money for the cash-poor country.

It was the South Korean company Hyundai Asan who first introduced trips to the famed Mt. Kumgang. But Hyundai Asan, of the Hyundai Group, shut down its Mt. Kumgamg Tourist Region in 2008. North Korea used what was left behind to start its own tourism business in that area.

Uri Tours is a tour company based in the U.S. state of New Jersey. They are planning a 13-day trip to a number of mountains including Mt. Kumgang and Mt. Myohyang. The company hopes to get at least seven travelers together later in the year.

The pro-Pyongyang newspaper Chosun Shinbo is published by ethnic Koreans living in Japan. It says the North Korean government is trying to get more tourists by offering more variety in its tourism products.

Pyongyang's usual tourist trips include picking fruit at local farms and orchards and long train rides through the country. One North Korean tourist package offers travelers the opportunity to compete with North Korean athletes in the traditional martial arts of Taekwondo.

The chance to tour and camp in a country that has been closed for so long could be a huge draw for travelers seeking a very different type of vacation.

This report was produced in collaboration with the VOA Korean service.