Update Required To play the media you will need to either update your browser to a recent version or update your Flash plugin.
By Mario Ritter Jr.
02 October, 2019


South Korea's military says it is "highly likely" that North Korea has tested a missile designed for launch from a submarine. It said the launch appeared to have taken place early Wednesday near the city of Wonsan on the country's eastern coast.

South Korea says the missile traveled about 450 kilometers and reached a height of about 910 kilometers. David Wright of the Union of Concerned Scientists said that although the missile did not travel far, it was able to do so. 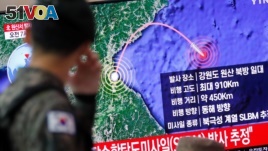 A South Korean soldier walks past a TV broadcasting a news report on North Korea firing a missile that is believed to be launched from a submarine, in Seoul, South Korea, October 2, 2019. (REUTERS/Kim Hong-Ji)

"This would classify the missile as a medium range (missile)," he said.

It is not clear if North Korea launched the missile from a submarine or an underwater structure.

If confirmed, it could be the first time since 2017 that the North has tested a missile that is able to travel more than a "short" distance.

Japanese officials said Wednesday that the missile landed in the country's exclusive economic zone. That is the area countries claim that extends about 370 kilometers from their coast.

Kim Dong-yub is a North Korea expert at Kyungnam University's Institute for Far Eastern Studies in Seoul. He said the most recent launch most likely carried a double message. Kim said it may have been meant to improve the North's negotiating position and also to answer South Korea's announcement of new weapons, including the F-35 stealth fighter from the U.S.

Talks set to begin in days

North Korean and American negotiators are to meet for talks Saturday. They would be the first talks between the countries since their leaders met at the demilitarized zone separating the two Koreas. At that time, President Donald Trump became the first U.S. president to enter North Korea while in office. There, he and North Korean leader Kim Jong Un agreed to restart working-level talks between their nations.

Last month, Trump said a "new method" to the nuclear talks would be, in his words, "very good." North Korean officials have called for a "new way of calculation" as the only way forward.

North Korea has repeatedly said it will not give up its nuclear weapons without anything in return. The country wants to take steps after which the U.S. eases some sanctions and provides security guarantees.

Trump and Kim have met three times since June 2018. During their first meeting, the two agreed to work towards the denuclearization of the Korean Peninsula. However, negotiators have not yet agreed on what that means.

Melissa Hanham is an expert with the Open Nuclear Network, a research group based in Colorado. She said that she hoped the talks would permit the negotiators to build ties and "perhaps lead to some actionable leads." About the negotiations, she added, "Any substantive working-level talks are good. Diplomacy is like a muscle and it needs exercise."

classify –v. to consider something to belong to on group or another

calculation –n. a careful thought or planning with the idea of arriving at a particular result