Update Required To play the media you will need to either update your browser to a recent version or update your Flash plugin.
By Christopher Jones-Cruise
04 February, 2016


First, North Korea said Tuesday it planned to launch an "Earth observation satellite" between February 8 and 25.

It said the launch is part of its peaceful space program. It says it wants to place satellites in space to gather information to help its weather experts make predictions.

But many experts say it is a way for the country to develop its nuclear weapons program. That program would be in violation of a United Nations ban on such activities.

The New York Times reports the proposed launch is part of a North Korean effort to develop "an intercontinental ballistic missile that can deliver a nuclear bomb." 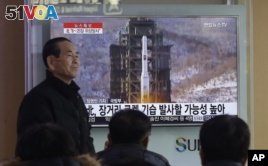 The newspaper reports that the United States has been helping to write a new U.N. Security Council resolution that would punish North Korea for these tests and launches. On January 6, North Korea conducted a nuclear test.

The United States, South Korea and Japan have warned North Korea that it will be punished severely if the launch takes place.

South Korea had talked about peace negotiations with the North, but that idea ended after the nuclear test in January.

And this week there are reports that South Korean companies may stop operating in the Kaesong Industrial Complex if the launch takes place. The area is operated jointly by North and South Korea, but is six miles north of the border with South Korea. It was formed in 2002.

About 120 South Korea companies operate in the area, or zone.

About 50,000 North Koreans work there. Some work at South Korean-owned factories there. This benefits both sides. It is the only development program between the two countries that is still operating.

Almost all relations and aid programs were cancelled in 2010 after South Korea accused the North of sinking a South Korean naval warship that killed 46 sailors.

President Park Geun-hye's support for strong international sanctions against North Korea has made South Korea's relations with the U.S. stronger. At the same time, it has weakened its relations with China.

Jonathan Pollack is an East Asia policy expert at the Brookings Institution, a research group in Washington. He says Chinese President Xi Jinping "has chosen not to communicate in a meaningful fashion with the government of the Republic of Korea, or with President Park Geun-hye, who he has closely cultivated over a period of time."

However, North Korea says its nuclear weapons program is necessary for national defense. It says it will not negotiate an end to the program. That means it will be difficult for China to convince North Korea to end its nuclear activities.

Critics say that if China does not take part in sanctions against North Korea, it will send that country a message of support.

Experts worry that sanctions put in place against North Korea by the United States or the United Nations could hurt China. That is because North Korea is already isolated and dependent on China for fuel, trade and aid.

Possible limits on trade and on companies that operate in North Korea could hurt Chinese companies and banks.

VOA's Brian Padden reported on this story from Seoul. Christopher Jones-Cruise adapted it into VOA Learning English. He also used reporting by The New York Times newspaper. Kathleen Struck was the editor.

We want to hear from you. Write to us in the Comments Section or on 51voa.com.

fashion – n. a specified way of acting or behaving

cultivate – v. to try to become friendly with (someone) usually to get some advantage for yourself

reluctant – adj. feeling or showing doubt about doing something;

acquiesce – v. to accept, agree or allow something to happen by staying silent or by not arguing

intercontinental - adj. traveling or able to travel between continents

ballistic - adj. of or related to an object that can travel a great distance, land on the ground and then explode

benefits - v. to help or assist