Update Required To play the media you will need to either update your browser to a recent version or update your Flash plugin.
By George Grow
06 March, 2018


A South Korean official says North Korea has suggested there was no need to keep its nuclear program if military threats against the country are removed.

He added that North Korea expressed a willingness to hold talks with the United States.

South Korea's top security advisor, Chung Eui-yong, made the comments to reporters in Seoul Tuesday. Chung heads the National Security Office and is the government's special representative to North Korea.

He spoke after a South Korean delegation returned from a two-day trip to the North. Chung met with North Korean leader Kim Jong Un during the visit.

The South Korean official said the two sides agreed on plans for a summit between the leaders of North and South Korea in late April. The meeting would be the first face-to-face talks between their leaders in more than 10 years. Chung added that North Korea said it was open to discussing denuclearization and normalizing relations with the U.S. government.

Reaction to the Pyongyang talks

Commenting on the recent developments involving North Korea, President Donald Trump on Tuesday tweeted, ‘We will see what happens."

Trump later added, "The World is watching and waiting! May be false hope, but the U.S. is ready to go hard in either direction!"

Last week, Trump reacted to a North Korean idea for talks with the U.S, by saying that will happen only "under the right conditions."

Earlier Tuesday, South Korean President Moon Jae-in expressed hope that improving relations with North Korean can lead to denuclearization talks between the North and the U.S.

He also spoke about Monday's meeting in Pyongyang between Chung, his special representative to North Korea and Kim Jong Un. Moon described those talks as the beginning of a larger diplomatic process.

After meeting with Moon, Chung planned to travel to Washington for talks with U.S. officials.

North Korea's official news agency KCNA described Monday's meeting in positive terms. It said Kim voiced his "firm will to vigorously advance" ties relations between the two Koreas. The news agency added that the two sides discussed "easing the acute military tensions on the Korean Peninsula" and that they "made a satisfactory agreement."

An official in Seoul's presidential Blue House said the "agreement" meant plans for a leaders' summit, and not talks with the U.S. 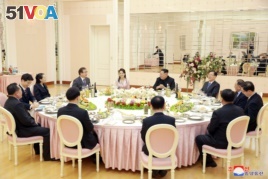 A dinner is prepared for members of the special delegation of South Korea's President in this photo released by North Korea's Korean Central News Agency (KCNA) on March 6, 2018. KCNA/via Reuters

In recent weeks, North Korea has acted with restraint by suspending missile and nuclear tests, and expressing a willingness to ease tensions with South Korea. The North also sent a delegation to South Korea for the recent winter Olympics.

Observers say the Kim government's sudden support of cooperation was also likely part of a plan to split the U.S.-South Korea alliance. They also believe he hoped to weaken international support for sanctions against the North.

The U.S. also showed support for the reduced tensions during the Olympics by agreeing to postpone joint military exercises.

But the Olympic truce could come to an end in April when the joint exercises are planned. The North Korean government has warned it will react to the exercises, which it claims are evidence of plans for invasion.

Brian Padden reported this story for VOANews. George Grow adapted his report for VOA Learning English. Hai Do was the editor.

denuclearization – n. removal of nuclear arms from an area

sanction – n. a measure or action that results from failure to obey a rule or law

scope – n. space for action or thought; extent of treatment or activity