Update Required To play the media you will need to either update your browser to a recent version or update your Flash plugin.
By Dan Friedell
06 January, 2016


North Korea says it tested a hydrogen bomb on Wednesday.

The test site is in the mountainous northeastern part of the country, near the border with China. 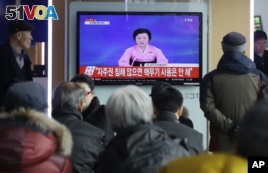 North Korea announced the test on its state-run broadcast. The announcer said the test was "a self-defensive measure to thoroughly protect our nation's autonomy."

A spokesman from the National Security Council in the United States says it is too soon to confirm North Korea's claim.

But if the claim is true, he says the U.S. "will respond appropriately to any and all North Korean provocations."

The last confirmed nuclear test by North Korea came in 2013.

If it was a nuclear test, an analyst from Korea Defense Network says, it was more powerful than previous tests based on the seismic activity it produced.

"North Korea's nuclear test could have been 2.5 times more powerful than Hiroshima," he said.

But intelligence officials from South Korea say they think the blast was not that powerful. They think the test produced an explosion less than half as strong as the one in Hiroshima during World War II.

Abe says, "North Korea's nuclear test is a serious threat to our nation's security and absolutely cannot be tolerated."

The United Nations Security Council will hold an emergency meeting Wednesday to discuss North Korea's claim of a test.

Last year, North Korean leader Kim Jong Un said his country had developed a hydrogen bomb. If North Korea's claim turns out to be true, it will have been the second nuclear test under Kim's leadership.

Brian Padden wrote this story for VOANews. Dan Friedell adapted it for Learning English. Kathleen Struck was the editor.

What do you think about North Korea testing a bomb? We want to hear from you. Write to us in the Comments section or on 51VOA.COM.

collision – n. a crash in which two or more things or people hit each other

condemn – v. to say in a strong and definite way that someone or something is bad or wrong

fission – n. a process in which the nucleus of a heavy atom is split apart

fusion – n. a process in which the nuclei of atoms are joined

nucleus – n. the central part of an atom that is made up of protons and neutrons

provoke – v. to cause (a person or animal) to become angry, violent, etc.