Update Required To play the media you will need to either update your browser to a recent version or update your Flash plugin.
By Mario Ritter
19 September, 2018


The leaders of North and South Korea say they have agreed to turn the Korean peninsula into a "land of peace without nuclear weapons and nuclear threats."

The agreement was announced Wednesday on the second day of talks between North Korean leader Kim Jong Un and South Korean President Moon Jae-in. They spoke to reporters after meeting in Pyongyang.

At the meeting, North Korea announced plans to invite international observers to watch the closing of its missile testing center and launch area at Dongchang-ri.

North Korea also offered to close its main nuclear center at Yongbyon, but on one condition. In exchange, the North said it was seeking "corresponding measures" from the United States. It is not yet clear what those measures would be.

South Korean President Moon traveled to the North Korean capital on Tuesday for his third meeting this year with the North Korean leader. Moon is seeking to break an impasse in negotiations to end the North's nuclear weapons program. 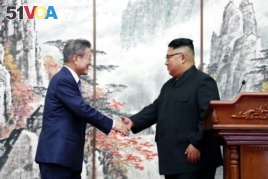 The two leaders signed a joint statement on Wednesday. In addition, military representatives signed a document stating steps to ease military tensions between North and South. That document called for, among other things, setting up buffer zones in places where the two militaries could come into conflict.

Also, Kim Jong Un said he would visit Seoul in the near future. Moon said the visit is expected to take place before the end of 2018.

North and South Korea have announced a number of joint economic projects, including plans to build roads and railways. However, some Korea watchers believe that some of the new agreements could violate United Nations sanctions on North Korea.

Days before the meeting in Pyongyang, the U.S. government ordered sanctions to punish a company based in China, its top official and a company linked to Russia.

The goal of the economic restrictions is to force the North Korean government to negotiate an end to its nuclear weapons and missile programs. The U.S. and Japan say those programs are a direct threat to them.

Members of the U.S. Congress and some experts say there has been no clear sign that North Korea plans to denuclearize.

Harry Kazianis is an expert in defense studies at the Center for National Interest in Washington, D.C. He said the sanctions remain in place and are a major issue. But first, "Kim needs to make major progress toward denuclearization," he said.

President Moon will travel to New York next week for the United Nations General Assembly. Moon said he looked "forward to North Korea and the United States resuming their dialogue." He is expected to meet with President Trump on September 24.

Moon added that South Korea would continue its part in supporting talks between the U.S. and North Korea. The aim, he said, is that the sides will "hold another summit as soon as possible and find a middle ground to reach an agreement."

Also on Wednesday, the two Koreas announced that they would seek to jointly hold the 2032 Summer Olympic Games. They also said they would work closely together in preparation for the 2020 Olympics in Tokyo.

Mario Ritter adapted this for VOA Learning English. His report was based on reports from VOA News, the Associated Press and Reuters. George Grow was the editor.

peninsula –n. a piece of land that is almost entirely surrounded by water and but is attached to a larger land area

impasse –n. a situation in which no progress seems possible

sanction –n. an action taken to force a country to obey international laws by limiting or stopping trade with that country

dialogue –n. a discussion or series of discussions that two groups or countries have in order to end a disagreement

summit –n. a meeting or series of meetings between the leaders of two or more governments