Update Required To play the media you will need to either update your browser to a recent version or update your Flash plugin.
By Mario Ritter
18 January, 2015

North Korea's deputy ambassador to the United Nations, An Myong Hun, says the joint military exercises are the cause of rising tensions. He added that many things would have been possible had the offer been accepted.

Last Saturday, the United States called the earlier North Korean offer an ‘implicit threat.' It said the North's nuclear tests violate many U.N. Security Council resolutions. An American official said the U.S. government remains open to discussions. But she said such talks must deal with the Korean peninsula's denuclearization. 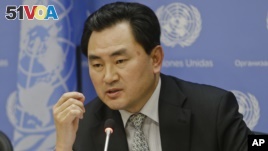 An Myong Hun, a North Korean official reacts to questions about the cyber-attack on Sony Pictures at United Nations headquarters on Jan. 13, 2015. (AP Photo/Frank Franklin II)

Tensions have risen after U.S. officials accused North Korea of launching a cyber-attack against Sony Pictures in November. The cyber-attack led to the release of sensitive documents. It is believed to have cost the film company millions of dollars. North Korea has denied involvement in the attack.

Daniel Glaser is a Treasury Department official. He says the new sanctions will enable the U.S. to financially pressure agencies and officials involved in cyber-terrorism. He says sanctions have even had an effect on the Chinese financial system.

Deputy Assistant Secretary of State Sung Kim says the U.S. is working more closely with China, North Korea's main ally in Asia. He said there is growing concern about the North's continued work on nuclear weapons and its human rights record.

"I think what we have seen in our cooperation with China is that China is working with us more effectively and trying to stifle North Korea's dangerous activities."

South Korea has offered to meet with North Korean officials without any pre-conditions. However, the United States continues to demand that North Korea limit its nuclear activities and honor earlier agreements before opening new negotiations.

The U.S. and South Korea often hold joint military exercises. The Korean War ended with a ceasefire in 1953. No treaty officially ending the war was ever signed.

This story was based on reports from VOA's Victor Beattie and Brian Padden. Mario Ritter wrote the story for VOA Learning English. George Grow was the editor.

peninsula - n., a piece of land almost completely surrounded by the sea

sanctions - n., actions taken or an order given to make a country obey international law

What do you think about the tensions between North and South Korea? Let us know your opinion in the comment section.