The Yonhap news agency says North Korea has set up a launch pad equipped to fire long-range ballistic missiles larger than those used in earlier tests. Yonhap said the launch pad is close to North Korea's border with China. The structure was said to be 50-meters tall. But it reportedly has been extended to a height of 67-meters.

The launch pad is now said to have the ability to launch a rocket double the size of the 30-meter tall Unha-3 rocket. North Korea used an Unha-3 rocket to send a satellite into space in December 2012. However, United States officials said the satellite went out of control while in Earth orbit.

Observers said the launch pad appeared to be a step toward development of an intercontinental-range missile -- one designed to hit a distant target. 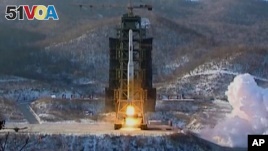 In this Dec. 12, 2012 file image made from video, North Korea's Unha-3 rocket lifts off from the Sohae launching station in Tongchang-ri, North Korea.

Yonhap said a government official in Seoul provided the information used in its report. The South Korean news agency said the launch pad could be used to fire a long-range missile sometime around October 10th. That is the day when North Korea will mark the 70th anniversary of its Communist Party.

Earlier this week, North Korea said it has no interest in negotiations that would result in the government giving up its nuclear program.

A foreign ministry statement said it was "illogical" to compare Iran's nuclear deal with world powers to the situation in North Korea. The statement went on to say North Korea is "always subjected to provocative U.S. military hostilities, including massive joint military exercises and a grave nuclear threat."

The Iranian nuclear agreement will limit the country's nuclear activities in exchange for an end to economic restrictions on Iran. After the agreement was announced, U.S. Undersecretary of State Wendy Sherman called on North Korea to learn from the deal.

"The one thing I will say, and I would say to the North Koreans is that this agreement demonstrates that one can come out of isolation, ... and do so in a peaceful way," she said. "It perhaps might give North Korea second thoughts about the very dangerous path that is currently pursuing."

North Korea said on Tuesday that it has no interest in any communications to discuss suspending or disarming its nuclear program. The North instead said that it is a "nuclear weapons state."

This report was based on material from the Yonhap news agency and VOA's News Division. George Grow adapted the story for Learning English. Hai Do was the editor.

pad – n. an area use for rocket launches or helicopter take-offs

ballistic missile - n. a weapon capable of travelling through the sky over a distance to hit targets

intercontinental - adj. having the ability to travel between continents

isolation – n. the act of being separated from others