North Korea Returns Remains of Korean War Dead to US

Update Required To play the media you will need to either update your browser to a recent version or update your Flash plugin.
By Mario Ritter
01 August, 2018


North Korea has returned to the United States more than 55 sets of human remains.

The remains are believed to be of Americans killed during the Korean War in North Korea.

A special ceremony was held at Osan Airbase in South Korea to mark the return. 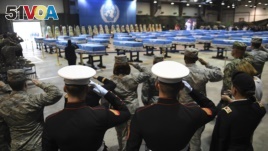 U.S. soldiers salute during a repatriation ceremony for the remains of U.S. soldiers who were killed in the Korean War and collected in North Korea, at the Osan Air Base in Pyeongtaek, South Korea, Wednesday, Aug. 1, 2018. A total of 55 containers will be returned to Hawaii for a second special ceremony.

The 55 boxes fulfill a promise, after some delay, by North Korea's leader to U.S. President Donald Trump during their meeting in Singapore on June 12.

An unidentified U.S. defense official, however, said there was only one set of military identification tags, known as dog tags, with the remains.

The official spoke to the Associated Press on the condition that the person would not be identified. The defense official said, "It could take months, or even years to identify them."

It could be difficult to find out if the remains are even American military members.

Troops from 16 other United Nations member countries fought with the U.S. during the war. Service members from countries including Australia, Belgium, France and the Philippines also have not been recovered from North Korea.

Last week, U.S. Defense Secretary Jim Mattis said the return of the 55 boxes was a good step but not a guarantee that the bones are American. "We don't know who's in those boxes," Mattis said.

The U.S. Defense Department estimates that about 7,700 American service members were missing during the Korean War from 1950 to 1953. About 5,300 were believed to be on North Korean soil. Many were placed in shallow burials on battlefields.

Efforts to recover remains in North Korea have faced political and other barriers. Between 1990 and 1994, North Korea returned 208 containers to the U.S. with remains. But examination showed that the remains were from more than 208 individuals. Of those, 181 have been identified.

Also, between 1996 and 2005, U.S.-North Korea joint efforts resulted in the recovery of 229 containers of remains. The Defense Department said 153 individuals have been identified.

The U.S. official who discussed the recently returned bones said the U.S. is considering including South Korea in future searches for remains in North Korea.

Richard Downes' father is one of the Korean War missing. He said that hopefully the most recent set of remains will lead to more information about those who are missing.

Robert Burns reported this story for AP. Mario Ritter adapted it for VOA Learning English. Hai Do was the editor.

tag –n. a piece of material: metal or cloth, that has identifying information on it