Update Required To play the media you will need to either update your browser to a recent version or update your Flash plugin.
By Jim Dresbach
15 August, 2016

Prices for goods in North Korea have remained stable. Reports note that business has slowed at the economic development zones. These zones were designed to appeal to foreign investment.

Lim Eul-chul is a professor of Korean Studies at Kyungnam University in South Korea. He spoke with VOA's Korean Service. He said economic activity decreased in two development zones near the Chinese border in the last five months.

Adam Cathcart is an East Asia expert at Leeds University in Great Britain. He said that even without sanctions, international companies are reluctant to invest in North Korea's economic development zones. He added the zones do "not provide enough infrastructure."

China is important to the North Korean economy. Close to 90 percent of North Korean trade flows either to or through China.

Last year, North Korean exports dropped almost 15 percent before the sanctions were in place. The Bank of Korea says the economic slowdown in China was the main cause of the drop.

Other reports suggest that sanctions are having some effect. Observers noted a drop in vehicle traffic at the Chinese and North Korean border. Some money transfers to North Korean banks have been suspended. Officials also have increased inspections of North Korean shipments entering Chinese ports.

However, there are also reports that say sanctions have not affected food and fuel prices. 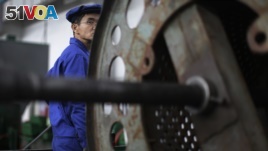 A North Korean worker looks from behind a piece of machinery at the Pyongyang 326 Electric Wire Factory, seen during a press tour on Friday, May 6, 2016.

News reports from Seoul show that the price of rice, corn, pork and fuel remained stable over the last year.

China called on North Korea to end its nuclear program. But, China also wants a stable North Korea as balance to the U.S. and South Korean military alliance.

Brian Padden wrote this story for VOA News with additional information from Kim Jung-woo and Youmi Kim. Jim Dresbach adapted the story for Learning English. Caty Weaver was the editor.

zone – n. an area that is different from other areas in a particular way

sanctions – n. actions that are taken or orders that are given to force a country to obey international laws by limiting or stopping trade with that country

infrastructure – n. the basic equipment and structures such as roads and bridges that are needed for a country to function

transfer – n. to cause something to move from one place

reluctant - adj. feeling or showing doubt about doing something