North Korea: 'No Interest at All' in Nuclear Deal

Update Required To play the media you will need to either update your browser to a recent version or update your Flash plugin.
By VOA
29 July, 2015


A North Korean official says his country will not negotiate with other countries about its nuclear weapons program. The (North) Korean ambassador to China said Tuesday that his country's situation is "totally different" from that of Iran. He added that North Korea does not have any interest at all in talks on suspending the program or, in his words, "giving up our nukes."

The comments came as United States diplomat Sydney Seiler visited Beijing. Mr. Seiler is the U.S. special representative to international talks on North Korea's nuclear activities. He went to China for discussions on how to re-start the long delayed negotiations.

On Monday, Mr. Seiler met with officials in South Korea. He said that the U.S. government is ready to negotiate a deal with North Korea as it did with Iran. The aim is to limit the country's nuclear abilities in exchange for removal of international sanctions against the North.

"The recent progress in our efforts at denuclearization with Iran provides an excellent example of the U.S. flexibility and willingness to engage with countries with whom we've had long standing differences," he said. 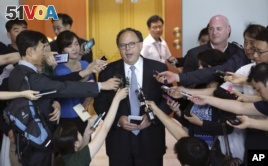 U.S. Special Envoy for Six-Party Talks Sydney Seiler, center, speaks to the media after his meeting with South Korean senior officials at the Foreign Ministry in Seoul, South Korea, July 27, 2015.

Some officials in Asia have expressed hope that the Iran agreement could serve as a catalyst to restart nuclear talks with North Korea. The six-party talks were suspended in 2009.

The government of Kim Jong Un has so far rejected efforts to re-start the negotiations. It has said that North Korea's nuclear weapons program is important to the nation's national security.

North Korea may be the target of sanctions, yet the country continues to develop its ability to use offensive weapons. Last week, South Korea's news agency Yonhap reported that North Korea's military had built a new launch pad for long-distance missile tests.

Nam Sung-wook is a professor of North Korean studies at Korea University. He says the North Korean government is not likely to compromise on its status as a nuclear power.

He says, even if the international community takes additional steps against North Korea, it is unclear whether the North will join in talks and give up nuclear power.

North Koreas leadership may have become more stable and less sensitive to international pressure for two reasons. Market reforms and increased trade with China have led to improving economic conditions.

U.S. officials said China is growing increasingly concerned over Kim Jong Un's unwillingness to engage in talks. But North Korea expert Ahn Chan-il of the World North Korea Research Center says China does not want to take action that may hurt its security.

He says China is pressing North Korea to end its nuclear program. But it has restarted supplying oil and partly approved visits for tourists.

The United States continues to demand that North Korea take actions to halt its nuclear development before any new talks can begin.

VOA's Brian Padden reported on this story from Seoul. Mario Ritter adapted it for Learning English. George Grow was the editor.

relief – n. aid or easing of some kind of pressure

catalyst – n. something that starts or causes a reaction

status – n. the state or situation something is in

engage – v. to involve; to bring together in an active way