North Korea's highest court has sentenced a Canadian clergyman to life in prison with hard labor.

The court said the Reverend Hyeon Soo Lim was guilty of crimes against the North Korean state. The Chinese state news agency Xinhua reported that he was found guilty of anti-government activities and spreading false propaganda.

Lim is the head pastor at the 3,000-member Light Korean Presbyterian Church in Toronto. He was detained earlier this year. Church officials say the clergyman went to North Korea on January 30 for a humanitarian trip. They said he planned to visit an orphanage, a nursery and a center for older adults. 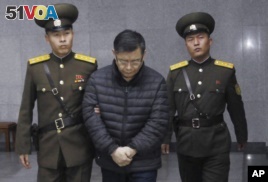 In July, Lim appeared at a press conference, where he read a statement. He admitted to crimes against the state. A video made in August showed him admitting guilt at a church in Pyongyang.

Some foreigners who have been detained in North Korea and later released say they were forced to make similar statements.

Lim was born in South Korea, but immigrated to Canada in 1986. Before his arrest, he had made 100 visits to North Korea.

This story was based on a report appearing on VOANews.com. Jim Dresbach adapted it for Learning English. Additional information came from the Associated Press and CNN.com. George Grow was the editor.

What do you think of Hyeon Soo Lim's sentence? We want to hear from you. Write to us in the Comments Section or visit our 51VOA.COM.

pastor – n. a clergyman responsible for a church or parish

orphanage – n. a place where children whose parents have died can live and be cared for

nursery – n. a place where children are cared for during the day while their parents are working