Update Required To play the media you will need to either update your browser to a recent version or update your Flash plugin.
By Hai Do
19 October 2021


North Korea on Tuesday fired at least one long-distance missile which South Korea's military said was likely designed to be launched from a submarine.

The launch of the missile came after South Korea successfully tested a submarine-launched ballistic missile, or SLBM, last month.

South Korea's Yonhap news agency reported that the missile flew about 430-450 kilometers, reaching a height of 60 kilometers. South Korea's Joint Chiefs of Staff said in a statement that North Korea launched a ballistic missile from waters near the eastern port of Sinpo. But it did not say whether the missile was fired from an underwater structure or a launch area above the surface.

Sinpo is a major center for North Korea's defense industry where the country builds submarines. In recent years, North Korea has also used Sinpo to develop ballistic weapons systems designed to be fired from submarines. There have also been signs that North Korea is trying to build a larger submarine that would be able to launch more than one missile.

North Korea last tested an SLBM in October 2019. It fired a Pukguksong-3 missile from an underwater launch structure. But the North has not shown that it can fire an SLBM from a submarine.

Leif-Eric Easley is a professor of international studies at Ewha Womans University in Seoul. He said, "North Korea's SLBM is probably far from being operationally deployed with a nuclear warhead, but (North Korean leader) Kim cannot politically afford appearing to fall behind in a regional arms race."

Other experts say that it would take years for North Korea to build submarines that could operate quietly and effectively execute strikes. Such an effort would require large amounts of resources and major technological improvements.

The U.S. Indo-Pacific Command stated that North Korea's latest launch did not present an immediate threat to U.S. troops, territory or allies. 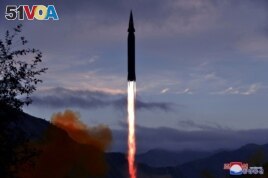 The hypersonic missile Hwasong-8 is test-fired by the Academy of Defence Science of the DPRK in Toyang-ri, Ryongrim County of Jagang Province, North Korea, in this undated photo released on September 29, 2021 by KCNA

Last month, North Korea claimed that it successfully tested a new hypersonic missile. The state-run Korean Central News Agency, or KCNA, released a picture of a test launch of a missile called the Hwasong-8. A hypersonic missile can fly very fast and very low making it harder for missile defense systems to recognize and defend against.

Chinese Foreign Ministry spokesperson Wang Wenbin said tensions on the Korean Peninsula were at a "critical stage." He called for renewed efforts toward a diplomatic resolution of the issue.

South Korea and the United States have repeatedly offered to restart nuclear talks with North Korea also known as the Democratic People's Republic of Korea or DPRK.

Sung Kim is the U.S. diplomat for North Korea. He said Monday, "To reach this objective, we will seek diplomacy with the DPRK." The aim, he said, was to reduce tension and increase the security of the U.S. and its allies.

"We harbor no hostile intent towards the DPRK, and we are open to meeting with them without preconditions," he added.

In a speech last week, North Korean leader Kim Jong Un rejected those offers. "Recently, the United States has frequently sent signals that it is not hostile to our state, but its behaviors provide us with no reason why we should believe them," Kim said.

Hai Do adapted this story for Learning English with reporting from AP and VOANEWS. Mario Ritter Jr. was the editor.

ballistic missile –n. a weapon that is shot through the sky over a great distance and then falls to the ground and explodes

regional –adj. something that happens in only in an area such as a part of a country or a part of the world

stage –n. a point in the development of something

harbor –v. to have something in one's mind for a long time

intent –n. the thing that you plan to do or achieve : an aim or purpose