Update Required To play the media you will need to either update your browser to a recent version or update your Flash plugin.
By VOA
18 April, 2016


A volcano in North Korea is at risk of erupting, according to scientists.

Scientists say Mount Paektu, on the border of North Korea and China, had one of the largest eruptions in history. That eruption took place around the year 946.

In 2013, researchers placed seismometers on Mount Paektu. These meters measured seismic waves beneath the volcano. Seismic waves are waves in the earth produced by an earthquake. 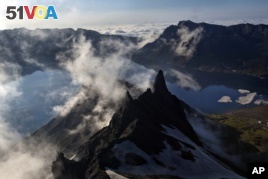 In this Wednesday, June 18, 2014 photo, clouds float over the peak of Mt. Paektu in North Korea's Ryanggang province. More than a thousand years ago, a huge volcano straddling the border between North Korea and China was the site of one of the biggest eruptions in history.

The volcano had been quiet until 2002. Then earthquakes started until 2005. Now, scientists have discovered soft and melted rock beneath Mount Paektu. They say magma is rising to the surface, and that proves the volcano is active.

The U.S. State Geological Service defines an active volcano as any volcano that has had at least one eruption during the past 10,000 years.

Mount Paektu is the tallest mountain in North Korea. Its elevation is close to 2,700 meters.

The information from the study was published in Science Advances journal.

Jim Dresbach adapted this story for Learning English and VOANews.com. Kathleen Struck was the editor.

erupt – v. to send out rocks, ash and lava in a sudden explosion

seismometer – n. an instrument that measures and records details of earthquakes, such as force and duration.

seismic waves – n. elastic waves in the earth produced by an earthquake