Update Required To play the media you will need to either update your browser to a recent version or update your Flash plugin.
By Dan Friedell
06 April 2021


The organizers of the Tokyo Olympics recently said fans from outside of Japan will not be able to attend the Games because of the COVID-19 pandemic.

Now, North Korea, a country that was expected to send athletes to the Olympics, announced it will not take part in the Games.

North Korea said its National Olympic Committee had a meeting in late March and decided not to attend in order to keep its athletes from getting sick. 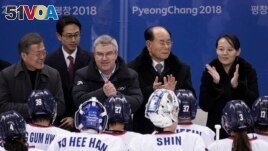 However, a number of international policy experts think the decision is a way to keep the country closed. North Korea said it has controlled the spread of COVID-19 by closing its borders, banning foreign visitors and sending diplomats home. But those who follow North Korea think that may not be true. The country already has a weak medical system because of international economic restrictions that have limited spending on infrastructure.

Experts say the closed border is making life in North Korea more difficult than necessary for the average person.

In a tweet, she asked if any other country has announced it would not attend the Olympics. She called the move "a political decision...as much as it is a public health concern."

A spokesperson for the South Korean foreign ministry said there is still time for North Korea to reconsider its decision.

Many people thought the 2018 winter Olympics in South Korea was a chance to renew diplomacy with North Korea. The closed-off nation sent 22 athletes, government officials, performers and a 230-member cheering group. Athletes from both North and South Korea marched under a flag with a blue map that symbolized a united Korean land.

Experts say North Korea's presence at the 2018 Games helped start discussions between former U.S. President Donald Trump and Kim. The talks, however, have not restarted for more than one year.

In addition, North Korea recently fired test missiles for the first time in one year.

The 2020 Tokyo Summer Olympics were delayed because of the coronavirus health crisis. The Games are scheduled to open on July 23.

VOA's Bill Gallo and the Associated Press wrote this story. Dan Friedell adapted it for Learning English. Mario Ritter, Jr. was the editor.

Do you think North Korea should reconsider its decision? Tell us in the Comments Section and visit 51VOA.COM.

athlete –n. a person who is trained in or good at sports, games, or exercises that require physical skill and strength

infrastructure –v. the basic equipment and structures (such as roads and bridges) that are needed for a country, region, or organization to function properly

symbolize –v. to be a symbol of (something); an action, object or event that represents something else