Update Required To play the media you will need to either update your browser to a recent version or update your Flash plugin.
By Mario Ritter
20 September, 2018

The South Korean president spoke in Seoul after returning from a three-day visit to North Korea.

Moon told reporters that he will carry a private message from Kim to Trump about nuclear issues. He again promised "to facilitate dialogue between North Korea and the United States."

The U.S. and South Korean leaders plan to meet in New York City next week during the United Nations General Assembly meeting.

Trump and Kim met in Singapore last June. At those talks, the North Korean leader promised to end his country's nuclear weapons program.

The Associated Press reported that Moon said he would convey Kim's desire to formally end the Korean War by the end of the year.

Moon also said he hopes that U.S. Secretary of State Mike Pompeo will visit North Korea soon for nuclear talks. Pompeo had been expected to meet with North Korean officials last month. But Trump cancelled the meeting, noting a lack of progress in negotiations.

On Wednesday, North Korea agreed to close down its nuclear center at Yongbyon. It also offered to take apart its missile launching center at Dongchang-ri. In return, the North said it was seeking "corresponding measures" from the U.S.

North Korea currently faces international sanctions that limit almost all of its exports and strongly limit imports from its few trading partners. The United States, South Korea and Japan also have set their own economic restrictions on North Korea.

Pompeo welcomed Wednesday's agreement and invited North Korean foreign minister Ri Yong Ho to meet him in New York City. The two are expected to meet during the U.N. General Assembly next week.

On Wednesday, the South Korean president said Kim had agreed to visit Seoul before the end of the year. 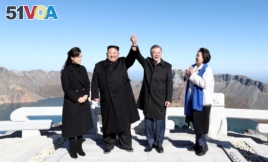 On the final day of Moon's trip to North Korea, Kim, Moon and their wives visited the top of Mount Paekdu. The group had pictures taken at the mountain's summit.

The ancient volcano is considered a sacred place in North Korea and is linked to the North's ruling Kim family. It also holds importance to both countries as the birthplace of the storied ruler of the first kingdom of Korea.

Mount Paekdu, which has a lake near its summit, also is the highest point on the Korean Peninsula.

Mario Ritter adapted this story for VOA Learning English from VOA News and AP stories. George Grow was the editor.

facilitate – v. to make easier; to help cause something to happen

convey – v. to take or carry something from one place to another

corresponding – adj. alike; having the same relationship as something else

sanctions – n. actions usually taken by one or more nations to punish another country for violating international law

summit – n. the highest point of a mountain