Update Required To play the media you will need to either update your browser to a recent version or update your Flash plugin.
By Christopher Jones-Cruise
08 February, 2016


North Korea's rocket launch on Sunday and the international criticism of its nuclear test last month may have strengthened its leader Kim Jong Un.

Reports in the North say the rocket launch showed the country is increasing its technological knowledge. The U.S. Joint Space Operations Center said the rocket launch placed two objects in Earth orbit. But it is not known if either of the objects is operating.

North Korea launched a satellite in 2012. It orbits the Earth every 95 minutes. North Korea says the satellite has cameras that can send images to Earth. But no signal has ever been heard from it.

On Sunday, the United Nations Security Council condemned North Korea for testing ballistic missile technology. The council rejected North Korea's claim that it was launching a satellite. It said the rocket launch was designed to help in the "development of nuclear weapon delivery systems." 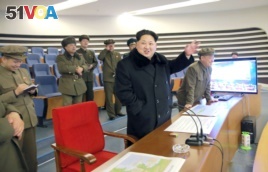 Experts say the recent rocket launch and nuclear test send a clear message to the world that North Korea will not end its nuclear program. They say North Korea's ruling Kim family was influenced by the removal of Moammar Gaddafi as ruler of Libya in 2011. In 2003, Gaddafi had promised to end his country's nuclear program. Experts say this has caused the North's rulers to increase their support of nuclear weapons tests.

Daniel Pinkston teaches international relations at Troy University in Seoul. He says he does not believe "any kind of sanctions or anything else, other than force or some internal revolutionary change in North Korea, would get them off this track. It's part of their identity."

orbit – n. the curved path that something (such as a moon or satellite) follows as it goes around something else (such as a planet)

signal – n. something (such as a sound, a movement of part of the body, or an object) that gives information about something or that tells someone to do something

sanction – n. an action that is taken or an order that is given to force a country to obey international laws by limiting or stopping trade with that country, by not allowing economic aid for that country, etc. (usually plural)

track – n. the course along which someone or something moves or proceeds