Update Required To play the media you will need to either update your browser to a recent version or update your Flash plugin.
By Jill Robbins
07 May, 2019

The office of South Korean President Moon Jae-in said it is "very concerned" the North Korean missile test violates the spirit of the inter-Korean agreements.

But U.S. President Donald Trump and other U.S. officials quickly suggested the test was not very important. They said the North did not violate its own promise to stop tests of intercontinental ballistic missiles, or long-range ballistic missiles. However, some experts warn that position could frighten U.S. allies because short-range weapons could still hit South Korea and Japan. 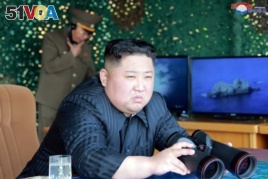 Robert Carlin is a North Korea scholar writing for the website 38 North. He says the North Korean test was probably a way to show anger toward the South Korean government for continuing joint military exercises with U.S. forces. Last month, Kim called the exercises "hostile acts."

North and South Korea did agree last April to stop "all hostile acts" against each other and eliminate the "danger of war." But they never signed an agreement to stop military exercises completely, and drills have continued on both sides.

North Korea also blames Moon for not acting on the inter-Korean agreements reached during three meetings over the past year. However, U.S. and international trade limits have prevented Moon from following through on many parts of the agreements.

Any time, any place, we can talk

The North Korean weapon launch puts additional pressure on Moon. His public approval rating was very high after his first meeting with Kim. Now it is half of what it was.

A growing number of South Koreans oppose his contact with the North. They see it as unexperienced and unsuccessful.

Moon still wants to work with the North. He said last month he would hold a fourth top-level meeting with Kim "any time, any place."

William Gallo reported on this story for VOA News. Jill Robbins adapted it for Learning English. Kelly Kelly was the editor.

intercontinental - adj. capable of traveling from one continent to another

long-rang – adj. relating to or fit for long distances

short-range – adj. relating to or fit for short distances

Are you worried about North Korea's missile launches? Write to us in the Comments Section.