Many Places Feeling the Heat Ahead of First Day of Summer

Update Required To play the media you will need to either update your browser to a recent version or update your Flash plugin.
By Dan Friedell
20 June, 2017

The summer solstice arrives on Wednesday, June 21. It marks the longest day of the year and the first day of summer.

But people north of the equator are already living with record heat one day before the start of summer.

In the southwestern United States, airlines canceled flights and doctors told people to stay indoors during the warmest parts of the day. 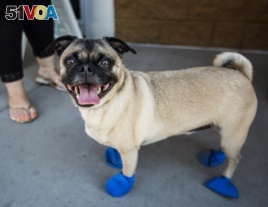 Cities like Phoenix and Las Vegas are known for their heat. But even residents of those cities are worried about temperatures as high as 49 degrees Celsius. It has not been that hot for 20 years.

Russ Goodman said the temperature inside his home reached almost 32 degrees on Sunday night. He was happy Alan Schwandt arrived Monday morning to replace a broken part. He called Schwandt and the other repairmen working in Phoenix "unsung heroes."

Hospitals are warning people to be careful with everyday items like door handles and leather car seats. Those things get dangerously hot in the sun.

In Las Vegas, many people spend their days inside large, air-conditioned hotels and casinos. A local meteorologist said the area with many well-known hotels, called "The Strip," can be one or two degrees warmer than the rest of the city. That is because concrete, asphalt and the bright lights of The Strip hold the heat during the daytime.

The heat is a problem all over the northern hemisphere.

In Europe, a large forest fire currently burning in Portugal has killed at least 60 people since Saturday. Prime Minister Antonio Costa said people do not remember a fire that large in the country.

The fire was started by lightning and spread because of high winds, dry conditions and the heat.

Wednesday also marks the first day of summer in India. But temperatures have already ranged between 44 and 49 degrees (Celsius) in June.

A study came out two weeks ago in the journal Science Advances about heat in India. It said just a small increase in temperature from 1960 to 2009 resulted in two-and-a-half times more heat-related deaths.

What will you do to escape the heat? We want to know. Write to us in the Comments Section or on 51VOA.COM.

equator – n. an imaginary circle around the middle of the Earth that is the same distance from the North Pole and the South Pole; the line that divides the Earth into the northern and southern hemispheres

unsung – adj. not given attention and praise that is deserved for doing good things

asphalt – n. a black substance that is used for making roads