Update Required To play the media you will need to either update your browser to a recent version or update your Flash plugin.
By Pete Musto
27 February, 2018


Norway has announced it will spend 100 million Norwegian crowns, or $13 million, to make improvements to a special seed vault in the Arctic.

The Norwegian government built the Svalbard Global Seed Vault in 2008 to store seed samples of the world's crops and plants. The vault serves as a natural deep freeze, and is meant to protect important genetic material in case of a major man-made or natural disaster.

It holds seed varieties of crops from around the world, including corn, rice and grains. The vault received its one-millionth seed sample on February 26, its 10th anniversary. It has the ability to hold about 2.5 billion seeds in total.

The vault is located on an island about 1,000 kilometers from the North Pole. The samples are buried deep below a mountain.

Svalbard was chosen as the site of the seed bank, in part, because of the area's permafrost – a thick layer of soil that stays frozen throughout the year. It makes for excellent underground cold storage.

But in late 2016, the permafrost began to unexpectedly melt. This caused water to flow into the entrance of the vault tunnel. Officials said the seeds were never in danger. However, the event raised concerns about the need to better protect the samples.

Norway's Agriculture Ministry said improvements to the vault will include a new entry tunnel. They also include construction of a service building for emergency power and cooling units and electrical equipment that might send heat through the tunnel. 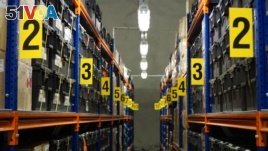 Jon Georg Dale is Norway's minister of agriculture and food. He announced the plans. He said they will help the vault continue to be a secure storage area. "It is a great and important task to safeguard all the genetic material that is crucial to global food security," he said.

The Svalbard vault acts as a backup to many of the world's seed banks. In 2015, researchers took out seeds from the vault to help build seed collections in Lebanon and Morocco. Those sites were set up to protect materials from an important seed bank in Aleppo, Syria, which was damaged by violence from the country's civil war.

The seeds were re-grown and returned to the Svalbard vault last year.

Dale said such efforts show "that the seed vault is a worldwide insurance for food supply for future generations."

We want to hear from you. What other major plans do you think the world's governments should make to prepare for huge disasters? Write to us in the Comments Section or on 51VOA.COM.

vault – n. a locked room where money or valuable things are kept

sample(s) – n. a small amount of something that gives you information about the thing it was taken from

underground – adj. located or occurring below the surface of the earth

tunnel – n. a passage that goes under the ground or through a hill

safeguard – v. to make someone or something safe or secure

insurance – n. protection from bad things that may happen in the future