Brainwash: Not as Clean as You Think

Update Required To play the media you will need to either update your browser to a recent version or update your Flash plugin.
By Anna Matteo
01 October, 2016


Hello and welcome to another Words and Their Stories.

Word experts say the word "brainwash" came into American English in the 1950s after the Korean War. According to reports, 24 American soldiers held in a Chinese prison-of-war camp chose to stay in China after the ceasefire. 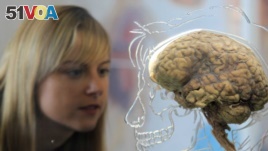 Your brain is amazing. Just don't wash it.

At that time, people in the American media and public could not understand why these young men did not want to return to the United States. So, they used the English translation of a Chinese word to describe what they believed had happened.

The American public claimed the Chinese brainwashed the soldiers into preferring China over the United States. They said Chinese officials used force and fear to make the soldiers believe that China was good and the U.S. was bad.

Now, that is a dark story on several levels. But don't worry. You can use the word "brainwash" without starting an international incident. In fact, few people even know the origin of the word. Today, "brainwash" is used in both informal and formal situations.

For example, let's say your friend takes a college course with a very charismatic professor. He uses his good looks, powerful personality and persuasive arguments to convince the class of mostly women that he knows best and is always right.

Your friend becomes obsessed with him. She begins to repeat his words all the time and she has changed her opinions to go along with his. You could say, she i s brainwashed.

To gaslight someone is also a type of brainwashing.

A gaslight is a light powered by gas. They were common before electricity was wired into people homes and neighborhoods.

So, why is gaslight a type of brainwashing?

This expression comes from the film "Gaslight" starring the actress Ingrid Bergman. Bergman marries a man who wants to convince her that she is crazy. He does this by dimming the gaslights in their London home. And then he pretends he doesn't notice.

The husband also plays other tricks on his wife that make her doubt her memory and her sanity.

To gaslight someone is a form of psychological abuse. It is when false information is given to a person in the hopes of making them doubt their own memory or perception of an event. It can even be used, as in the movie, to make a person think they are going insane.

"Gaslighting" is most common in very close relationships.

For example, let's say your best friend is dating a really bad guy. You don't like him or trust him. In fact, you have caught him lying to your friend several times. Once on her birthday, he claimed he was home sick in bed. However, you saw him that later that night in a restaurant with another woman!

You tell your friend and she confronts him about the lie. He uses clever excuses to explain himself. He says he was never out and accuses your friend of being jealous.

Your friend leaves the conversation feeling bad about herself for accusing her boyfriend and mad at you for making her doubt him. You could say to her, "You are so foolishly in love with this guy, that you can't see that he is gaslighting you! Wake up!!

You can also say to someone who you think is trying to play mind games with you, "Look, don't try to gaslight me. I am on to you!!"

But we usually the term when talking about other people. If you are a victim of brainwashing or gaslighting you probably won't know it.

That is, after all, the whole point.

charismatic – adj. having great charm or appeal : filled with charisma

persuasive – adj. able to cause people to do or believe something : able to persuade people

jealous – adj. feeling anger because of the belief that a loved one might be unfaithful

mind games – n. actions that are meant to confuse or upset someone in order to get an advantage <I couldn't handle the head games that came with the job anymore.> <She's known for playing mind games with her opponents.>