Not Many Syrian Refugees Welcomed in Russia

Update Required To play the media you will need to either update your browser to a recent version or update your Flash plugin.
By VOA
19 October, 2015


Tens of thousands of refugees from Syria continue to flee unrest by traveling to Europe and neighboring countries.

But many do not seek refuge in Russia, despite longtime political and economic relations between the two countries.

According to the United Nations High Commissioner for Refugees, or UNHCR, there were 238,836 refugees and asylum seekers in Russia as of January. Only 2,340 were from Syria. And that number has dropped to about 1,600. 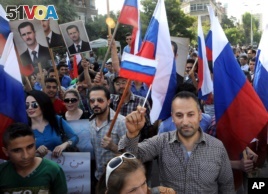 This photo from the Syrian official news agency SANA shows Syrians rallying in front of the Russian Embassy in Damascus to show their thanks to Russia for its intervention in Syria, Oct. 13, 2015. But few Syrians who leave their country are finding Russia welcoming.

Turkey has taken in over 2 million Syrians. Germany is expected to have as many as 1.5 million refugees by the end of this year. Most of those refugees are from Syria, Afghanistan and Iraq.

Bayisa Wak-Woya is the UNHCR representative for Russia. He said, "Unlike in the West, where people have a tradition of dealing with asylum-seekers and refugees for the last six, seven decades, here it's a fairly new phenomenon." And many in Russia view refugees as foreigners and migrants.

Another reason is the great distance from Syria to Russia. The distance between Moscow and Damascus is about 2,500 km. That means most Syrian asylum-seekers have to come by plane, not by boat, bus, and train like those arriving in Europe.

A UNHCR spokesman says Russia's airstrikes could increase the number of Syrian refugees to neighboring countries like Turkey. But he adds that a jump in the number of asylum seekers arriving in Russia is unlikely.

Russia has granted refugee status for 790 people as of January. Most are from Afghanistan and Ukraine. Only two persons are from Syria.

Elena Burtina is with the refugee aid group Civic Assistance Committee in Moscow. She notes that the much smaller Republic of Malta has given refugee status to more people than Russia.

"Russia ratified the convention on refugees," she said. "It's taken on the responsibility to accept them. Of course it should do more. They shouldn't have signed if they didn't want refugees. They weren't forced to do it."

Do you think Russia should take more refugees? Or not? Please let us know in the Comments section or on 51VOA.COM.

Daniel Schearf reported this story for VOANews. Jonathan Evans adapted it for Learning English. Hai Do was the editor.

asylum – n. protection given by a government to someone who has left another country in order to escape being harmed

ratify – v. to make a treaty, agreement, etc. official by signing it or voting for it

status - n. the official position of a person or thing according to the law