Update Required To play the media you will need to either update your browser to a recent version or update your Flash plugin.
By Mario Ritter Jr
17 April, 2019


France has promised a worldwide effort to rebuild Notre-Dame Cathedral in Paris, the famous Christian church damaged by fire this week.

Many people have been sharing pictures of themselves and their families visiting Notre-Dame. For many, the building combines their personal memories with a long-established cultural heritage.

Live images of the fire were broadcast and shared as firefighters struggled to contain the flames that destroyed the building's tall spire and its wooden roof.

The fire happened at a time when some social media companies are testing methods for fighting back against false information. But in the case of YouTube, its methods did not help stop false information from spreading. YouTube's algorithm detected the images of the burning cathedral and sent users links about the terrorist attacks on the World Trade Center on September 11, 2001. Links included Wikipedia and Encyclopedia Britannica entries about the 9/11 attack.

Observers say the incident demonstrates some of the problems with automatic systems that are meant to correct misleading information.

French president Emmanuel Macron sent a message on Twitter expressing sadness at the loss, "I am sad tonight to see this part of us burn."

He and many French leaders stressed the importance of the cathedral to France's common culture. 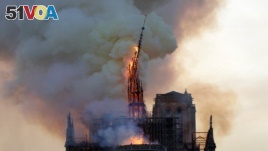 The steeple and spire of the landmark Notre-Dame Cathedral collapses as the cathedral is engulfed in flames in central Paris on April 15, 2019.

U.S. President Donald Trump tweeted that he offered sympathy to the head of the Catholic Church Pope Francis and offered U.S. experts to help rebuild it.

Notre-Dame de Paris is among the most famous Catholic churches in the world and is the seat of Catholic leadership of Paris. It is estimated that 13 million people visit the building every year.

The Paris public prosecutor is investigating the cause of the fire, which is suspected to be linked to extensive renovation work.

On Wednesday, France announced it would invite architects from around the world to propose designs to replace the spire that was destroyed in the fire. Prime Minister Edouard Philippe said a competition would decide whether the cathedral should have a new design or be rebuilt as it was.

heritage –n. the traditions, achievements and beliefs that are part of the history of a group or nation

algorithm –n. a set of steps that are followed to solve a mathematical problem or complete a computer process

fact-check –v. to find out if a claim or statement is true or correct

spire –n. a tall, narrow, pointed structure on the top of a building