Update Required To play the media you will need to either update your browser to a recent version or update your Flash plugin.
By Christopher Jones-Cruise
06 October, 2016


The United States Department of Justice says a man employed by a private company that was performing work for the National Security Agency has been arrested. In a statement, the department said 51-year-old Harold Thomas Martin III of Glen Burnie, Maryland, was being investigated for taking "highly classified" information.

The statement said Martin was arrested in late August. It said he had a top secret national security clearance.

The statement said six documents were taken that had information in them from intelligence reports. It said they were "produced by a government agency in 2014."

Investigators say the documents were classified Top Secret. This means that revealing what is in them "reasonably could be expected to cause exceptionally grave damage to the national security of the U.S."

The New York Times newspaper reported that Martin is suspected of stealing information from an NSA computer program. The program is designed to secretly enter the computer systems of countries including Russia, China, Iran and North Korea. It said Martin worked for Booz Allen Hamilton. The company provides services to the federal government as well as private companies. 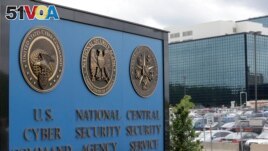 In a statement, Booz Allen Hamilton said that as soon as it learned that Martin had been arrested it immediately offered to help investigators. The company also said it had fired him.

"We continue to cooperate fully with the government on its investigation into this serious matter," it said.

Investigators said that during the search, they found documents as well as information stored on small devices.

Martin could be imprisoned for up to 10 years if he is convicted on charges of illegally removing and storing classified materials and stealing government property.

The Justice Department said when investigators first questioned Martin, he denied he had taken any documents or computer files. But it said when he was shown documents investigators believe he illegally removed from his office, he admitted he took them. He also admitted that he knew they were classified.

In 2013, Edward Snowden, stole 1.5 million documents from the NSA while working for Booz Allen Hamilton, the same company as Martin. Snowden used the stolen documents to prove the existence of several secret U.S. surveillance programs. The U.S. government charged Snowden with espionage. He could be sentenced to 30 years in prison if he is convicted. But he fled the country and has been given asylum in Russia.

contractor – n. a person who is hired to perform work or to provide goods at a certain price or within a certain time

classified – adj. kept secret from all but a few people in the government

clearance – n. an official decision saying that someone has permission to do something

device – n. an object, machine or piece of equipment that has been made for some special purpose

espionage – n. the things that are done to find out secrets from enemies or competitors; the activity of spying