Update Required To play the media you will need to either update your browser to a recent version or update your Flash plugin.
By Anne Ball
13 July, 2016


The agreement limiting Iran's nuclear program in return for easing international restrictions on the country is now one year old, but fragile.

The United States, six other world powers and Iran finished nearly two years of negotiations on the Joint Comprehensive Plan of Action on July 14, 2015.

The agreement set out steps Iran had to take to prevent the country from being able to make nuclear weapons. It also ended many of the West's financial, trade and oil sanctions that had hit Iran's economy hard.

Recently, Secretary of State John Kerry said the agreement contained Iran's nuclear program. "It really wasn't long ago that we saw a rapidly expanding nuclear program in Iran, only months away from having enough weapons-grade uranium to build 10 to 12 nuclear weapons," said Kerry.

Iran has shut down thousands of centrifuges for enriching uranium. It also has exported almost all of its bomb-making material, according to the Associated Press. 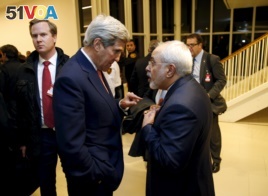 The Obama administration and some independent experts say if Iran were racing to make a nuclear weapon, it would need at least a year.

The U.S. and its partners—Britain, China, France, Germany and Russia—say that is enough time to discover it and stop it.

Iran's moves mean the threat of a military conflict is gone, for now, according to the Associated Press.

However, upcoming elections in the U.S. and an election next year in Iran could bring new leaders who want to undo the deal.

In the U.S., Democratic presidential candidate Hillary Clinton supports the deal, but Republican candidate Donald Trump says he would "renegotiate" it if he wins.

In Iran, President Hassan Rouhani and his government, which helped negotiate the agreement, could be replaced.

And in the Middle East, Israeli leaders still strongly oppose the deal although there is little talk of airstrikes or military intervention against Iran.

For now, the agreement is holding.

The U.S. and Iran also are expanding cooperation.

The American company, Boeing, reached a deal with government-owned Iran Air to buy passenger airplanes. That agreement could be worth as much as $25 billion. That suggests some of the agreement's early problems may be easing.

However, in the U.S. Congress, both Republicans and Democrats, who opposed the nuclear agreement want to stop the airplane sale.

Last week, the House passed two measures to block the sale. The Senate has not acted yet. President Obama would likely veto the bill blocking the sale.

Supporters say the deal is a success because Iran does not have nuclear weapons.

Those opposed, however, warn that this is just year one, and there are seven more to go, in the eight-year agreement.

Anne Ball adapted this story for Learning English from the Associated Press. Mario Ritter was the editor.

We want to hear from you. Write to us in the Comments Section below and find us on 51VOA.COM.

ballistic missile – n. a weapon shot through the sky over a big distance and then falls to the ground and explode

cusp – n. the edge of something

centrifuge – n. a machine that spins substances inside a container around very fast, causing the heavier substances to move to the bottom or sides of the container.

veto – n. a decision by a person in authority to not allow or approve something